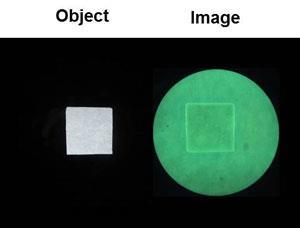 Making sense of complex sensory information can be a matter of life and death. That’s why some animals, from fish to cats to humans, use edge detection to decode their visual environment: they identify some objects just by their outline, reducing the information content of complicated signals so that predators or prey might be spotted more quickly amongst a noisy background. But edge detection is not a trivial task, and still presents challenges for computer scientists developing artificial vision and image processing software.

Now a team of chemists at Queen’s University in Belfast, UK, has demonstrated an edge-detecting imaging method based purely on a chemical process.1 ‘This is the first time that small molecules have achieved a computation that normally requires a computer with a graphic user interface,’ says A Prasanna de Silva, who led the team. ‘Our “graphic user interface” is just humble filter paper.’

The technique builds on previous work by de Silva’s team that uses pH sensitive fluorescence of small organic molecules to carry out molecule-based logic operations. They use a molecule of the aminoalkylaminonaphthalimide family, which fluoresces when irradiated with ultraviolet light. The fluorescence is boosted about 200-fold when the molecule is protonated, making it a good optical pH sensor. De Silva and colleagues can trigger protonation using ultraviolet light, which activates proton release from a donor (a triphenylsulfonium ion). Through a patterned mask, they irradiate an area of filter paper soaked in the pH sensor, the proton donor and a sodium carbonate buffer. The fluorescence is then excited by UV light of a slightly longer wavelength. But after about 30 minutes this fluorescence is turned off again because the proton donor photochemically decomposes into a molecule that quenches the fluorophore by transferring an electron to it.

The edges of the masked area – the ‘object’ that this system is detecting – stay bright, however. That’s because the protons released by the donor molecule diffuse through the moist filter paper into the region just beyond the mask edges. Here the protons may be neutralised by the alkaline buffer, but once there are enough of them, they ‘switch on’ the fluorophore molecules all around the perimeter of the irradiated area. This region is just 1–2mm thick, and de Silva and colleagues say that the resolution of edge detection could be improved by further optimisation.

Edge detection has been achieved previously with genetically engineered bacteria2 and reacting networks of DNA3, but now it can be done simply and inexpensively with just these small molecules. ‘This is major step forward in installing complexity in molecular logic-based computation,’ says Alexander Schiller, a specialist in molecular logic at the University of Jena in Germany. ‘It shows that computational paradigms based on molecules are highly appealing for real-world applications like image processing and photolithographic patterning,’ adds Alberto Credi, who works on molecular switching at the University of Bologna in Italy.