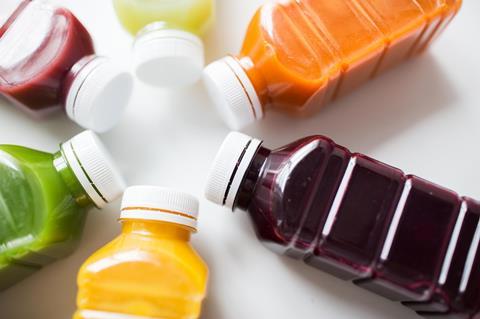 Scientists in Germany have designed a simple polymer that can be used in a sensor to distinguish between similar fruit juices.

Sensors that analyse food, drink and drugs are important for quality control and preventing fraud. Chemo-optical sensors, or tongues, already exist for testing wine, coffee, whiskey and other beverages. Due to the complex nature of these samples, the tongues comprise a number of sensors, which undergo structural changes to provide a colour or fluorescence pattern in the presence of various analytes. Chemometric techniques then analyse the pattern, reporting the distinct ‘taste’ for each product.

Now, Uwe Bunz and colleagues at Heidelberg University have questioned how simple an chemo-optical tongue can be yet still undergo enough structural changes to provide fluorescence patterns to distinguish between complex samples.

They have shown that one type of polymer can be used to recognise 14 commercial apple juices, six grape juices and five blackcurrant juices. The tongue’s backbone, poly(para-phenyleneethynylene), contains phenyl rings that can either be parallel to each other or twisted. A combination of hydrogen bonding, hydrophobic and electrostatic interactions allow a broad-range of fluorescent quenching responses between the polymer and juice sample. When measured at pH 13, 7 and 3 the fluorescence pattern is specific enough to distinguish between each juice.

‘This study brings a very significant contribution as the researchers produced a minimalist tongue made with just one fluorescent polymer capable of discriminating tens of commercial brands of juices,’ says Osvaldo Novais de Oliveria Jr, an expert in optical sensors at the Federal University of São Carlos, Brazil. ‘This strong performance did not require specific interactions or mechanisms between the polymer and molecules in the juices analysed.’

‘We hope our sensor will be used for quality control of high value targets such as very expensive white wines. It could also be used for detecting counterfeit alcoholic beverages,’ says Bunz. The team is now working on designing simple sensors for antibiotics, sugars and other complex samples.