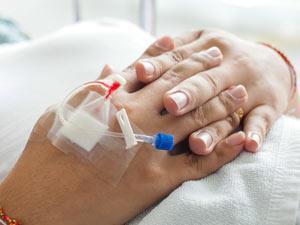 Scientists in China have developed a fluorescent probe to detect both heparin and its major contaminant. The sensor could make it easier to monitor the quality of heparin supplies.

Heparin is widely used as an anticoagulant in cardiovascular surgery as well as in post-operative and long-term therapy. Millions of patients are treated with it each year; in 2013 sales of low molecular weight heparin reached $6.5 billion (£4.2 billion). Heparin doses must be maintained within a strict range because overdoses can have numerous side-effects, such as unusual bleeding and blood in the urine. Purity is also an important issue. It is not unheard of for the contaminant oversulfated chondroitin sulfate (OSCS) to slip into the heparin supply chain. OSCS mimics heparin in many tests but can lead to severe adverse reactions. 150 deaths between 2004 and 2008 in the US were thought to be a result of drug manufacturers deliberately cutting heparin with OSCS to save money.

Activated clotting or activated partial thromboplastin time assays are currently used to calculate heparin doses, but these are time-consuming, expensive and can be unreliable. And identifying OSCS in heparin currently requires methods such as high performance liquid chromatography combined with NMR and mass spectrometry, which require expensive and sophisticated instruments and experienced operators. This prompted Hui Wei and co-workers at Nanjing University in China to design a single fluorescent probe capable of detecting and quantifying heparin and OSCS, which can be applied to both unfractioned heparin and low molecular weight heparin – the two main heparin products used clinically.

The probe combines a peptide that recognises heparin as well as a fluorogen signalling component – in the presence of heparin the probe molecules aggregate and fluoresce with a detection limit as low as 3.8ng/ml. If the enzyme heparinise is then added to the test sample, the same probe can check for OSCS with a detection limit of 0.001% (w%). This is because OSCS inhibits heparinise, which would normally break the probe–heparin interactions and cause a reduction in the fluorescence. 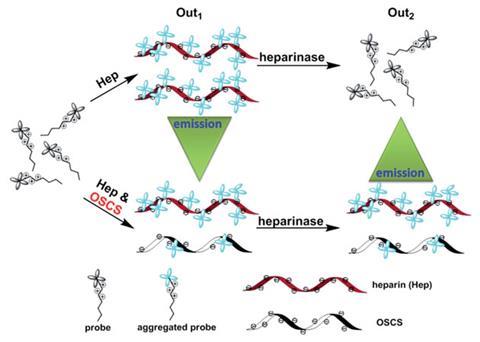 Other biological molecules do not appear to interfere with the probe. Wei says the ‘method could not only simplify the detection of heparin but also shorten its detection time, which in turn could reduce the burden on patients. And, the OSCS identification strategy may provide an alternative way to control heparin quality.’

Biosensors experts are enthusiastic about the sensor. Ben Zhong Tang from the Hong Kong University of Science and Technology particularly likes the design and envisages that ‘this smart strategy will generate a large array of light up biosensors with outstanding performance.’ And Kenneth Kam-Wing Lo from the City University of Hong Kong says ‘this interesting work will inspire the development of molecular probes and assays for biomolecules with high selectivity and sensitivity.’ Wei is currently working on these ideas as well as applying the probe to real blood samples.