US researchers have discovered a simple one-pot, scaleable way to synthesise aziridines – three-membered rings that are important building blocks for introducing nitrogen into more complex molecules, including medicinal drugs.

Current routes for aziridine synthesis typically require a protecting group on the nitrogen atom that provides stability to the molecule. However, this N-protecting group must then be removed in order to use aziridines as building blocks and this removal involves harsh reaction conditions, which often damages the ring structure and thus limits its use.

Now, a direct method for preparing N–H and N–Me aziridines from alkenes under mild conditions has been developed that avoids the need for an N-protecting group. 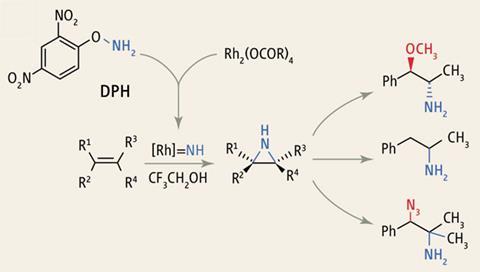 'The surprising synthetic and mechanistic results presented in our paper constitute a paradigm shift and will be of considerable interest not only to synthetic and medicinal chemists but also to the theoretical, structural and organometallic communities,' says László Kürti, a co-author of the work at the University of Texas Southwestern Medical Center.

The aziridination method involves the reaction of an alkene with the aminating agents DPH (dinitrophenyl-hydroxylamine) or N–Me–DPH in the presence of a rhodium catalyst, which produces N–H or N–Me aziridines at ambient temperature. 'As often happens, the yields were initially poor, but were gradually optimised it by a systematic investigation of the reaction parameters, especially the metal catalyst and its ligands,' Kürti explains.

'The stereospecificity of this process was especially surprising – the literature predicts that in order to make a single metal nitrene, the N atom must have a strongly electron-withdrawing [N-protecting] group,' says Kürti. 'Clearly, we had to have a very interesting mechanism in order to observe a high degree of stereospecificity.'

'This important advance not only allows stereospecific access to versatile N–H aziridines from a wide range of unactivated substrates, it does so under mild conditions with simple reagents,' comments James Bull, who investigates aziridine synthesis at Imperial College London, UK. 'Generating the reactive nitrene catalytically and without requiring an additional base or oxidant is crucial, allowing extremely sensitive functional groups to be tolerated. As a result this method is likely to provide much improved access to valuable synthetic intermediates.'

However, the team recognises the reaction is limited by not being able to selectively produce a particular mirror image of the molecule. 'An enantioselective version of this transformation would be highly desirable but currently we do not have a suitable chiral catalyst that produces practical levels of asymmetric induction,' says Kürti. 'The development of new chiral ligands and catalysts is a major focus of our collaborative effort.'