Simulating your way to a better supercapacitor

Researchers have used computer simulations to elucidate how supercapacitors are able to store electric charge. The work could open new ways of designing future carbon materials with higher energy densities, which could vastly reduce charging times in various applications including electric cars and consumer electronics. 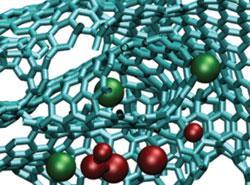 The past decade has seen several important developments, including the discovery that controlling the porosity of microporous carbon electrodes leads to an increase in ion adsorption, and thus capacitance. However, while many experimental studies have since confirmed this effect, no one had been able to quantitatively explain or visualise the details of the ion electro-adsorption involved.

Now, researchers from France, the UK and the US have used realistic molecular-scale computer simulations to examine how ions are arranged in carbide-derived carbon electrodes, which has cast light on the origin of supercapacitance at the atomic scale.

In order to examine the behaviour of ionic liquids at the interface with carbon electrodes, the team designed a realistic simulation cell consisting of an ionic liquid electrolyte surrounded by two porous electrodes which could be held at a constant potential. When two different voltages were applied between the electrodes, the team could compare how ions are organised in the electrified pores of electrodes and how they behave at a planar graphite surface.

’This gives us an insight on the molecular origin of supercapacitance,’ says Mathieu Salanne at the Pierre and Marie Curie University in Paris, who led the study. ’Most importantly, we observed that the ionic densities are not larger at the surface of the porous electrode compared to planar graphite, which indicates that the additional charge stored is not due to an additional adsorption but rather to changes in the structure of the adsorbed liquid layer.’

Mojtaba Mirzaeian who investigates supercapacitors at Queen’s University Belfast, UK, says the simulations offer new and useful information on the mechanism of ion separation and charge storage inside microporous electrodes. ’This could be beneficial in the preparation of microporous carbons with desired porous structures to enhance the capacity and performance of EDLCs,’ he says.

’For the moment we have mainly focused on the electrolyte,’ says Salanne. ’For improving supercapacitors, the carbon electrode structure will play the most important role so we expect our further simulations to provide insight on which kind of structures, including distribution of pore sizes, pore shapes and connectivity between the pores, should be targeted,’ he adds.