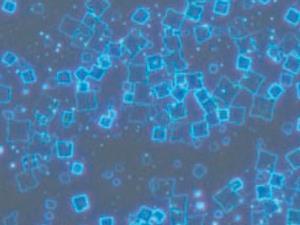 A team of scientists in the US has successfully produced a single crystal layer perovskite sheet. The ultrathin film will allow researchers to probe the electronic properties of the popular photovoltaic material and may lead to a new family of semiconductor components in optoelectronics.

Although thin films of the light-harvesting organo–metal halide structure have been produced since 2009, it has been difficult to make an atomically thin sheet using the current manufacturing techniques available, such as spin coating or chemical vapour deposition.

Letian Dou and his colleagues at the Lawrence Berkeley National Lab produced their single perovskite sheet by dissolving tetramethylammonium bromide and lead(ii) bromide in a diluted dimethylformamide solvent and depositing the solution onto a heated silicon dioxide surface. Single layer (C4H9NH3)2PbBr4 perovskite sheets grew out as the solvent evaporated.

The lattice structure deforms over time and the team suggest this feature may be exploited in the future to tune the photoluminescent properties of the sheet.