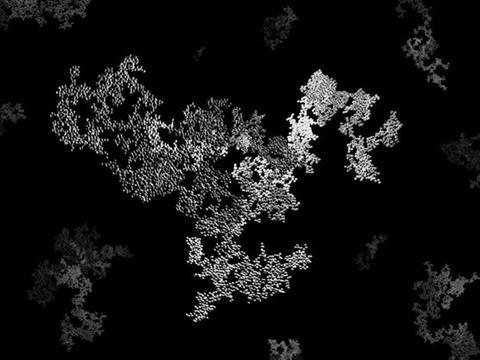 An international team of researchers has developed a way to study the shape and structure of individual aerosol particles in their native environment. This should help climate modellers and toxicologists to get a better handle on why aerosols behave in the way they do.

Airborne particulates like soot, with diameters smaller than 2.5µm, play a critical role in global warming and constitute a health hazard because they easily enter human lungs. Their shapes have been studied extensively using several different techniques but they have limitations, according to Michael Bogan from the SLAC National Accelerator Facility at Menlo Park, California, US. For electron microscopy, the particles must be trapped on a plate so they cannot be studied freely in flight. X-ray synchrotron radiation studies circumvent this problem but cannot measure single aggregate particles, only clusters.

Now Bogan says that his team have cracked the problem of studying the morphology of single airborne particles in flight using a combination of x-ray free-electron laser irradiation and mass spectrometry. The method uses the Linac Coherent Light Source (LCLS) which was ‘specifically proposed for the study of rare-gas clusters or biological particles like cells and viruses’, Bogan says, but has now been extended to complex airborne particles.

A jet of spark-generated soot particles is intercepted with short laser pulses with a wavelength of 1nm and the electron diffraction patterns of the individual particles are measured by an x-ray detector. At the same time, the laser pulses break up the particles to produce ions, which are detected with time-of-flight mass spectrometry to determine the elemental compositions.

The diffraction patterns showed that the soot particles cluster randomly into complex entities which can be described by the fractal dimension (D) which defines a relationship between the repetition of the individual particles and its change in scale. For a set of particles 20–170nm in diameter, the average value of D was 2.3, which is higher than that generally observed for soot particles generated this way.

Christopher Sorensen from Kansas State University, US, who studies aerosols and nanoparticles by light scattering, is surprised by the large value of D, which has consistently been measured at 1.8. ‘It is generally acknowledged, but not well substantiated, that this larger D is a result of D=1.8 aggregates restructuring in complex flow environments to the larger D. The authors acknowledge the possibility of in-flight restructuring,’ says Sorensen, but provide no evidence to support it.

By correlating the mass spectra with the diffraction images, the research team could deduce the content of the particles. Large ions like [Na(NaCl)]+ and [Na(NaCl)2]+ marked the presence of sodium chloride which was supported by the single-particle diffraction data. The soot particles were dominated by carbon-based ions like [C2H]+ and [C3H3]+.

Matthew Berg from Mississippi State University, US, who studies light scattering by nanoparticles, is impressed by the research. ‘They have achieved what many of us in the light scattering community might refer to as the “ideal measurement” of fractal aggregated-matter, which is the determination of single-aggregate morphology with nanometre resolution,’ he says.

But Sorensen takes a different view. In particular, he takes issue with the statement that visible light scattering provides insufficient resolution, pointing out that his own lab has achieved measurements that range from 50nm to more than 10µm – far broader than 20–170nm which Bogan presents data for. ‘They miss an opportunity which optical scattering doesn’t have. With their 1nm radiation, they could have achieved length scales of about 1nm, small enough to resolve the monomers (primary particles), which for spark generators are typically 10nm in diameter,’ he says.

Bogan says that future work will focus on applications associated with climate science and imaging biological samples. ‘We have performed subsequent LCLS experiments with these goals in mind. However, much basic science research remains before aerosol dynamics studies with x-ray free electron lasers can be made routine,’ he says.