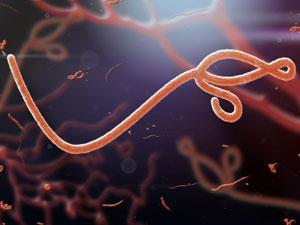 The first laboratory trial demonstrating the effectiveness of an experimental drug against the strain of Ebola currently ravaging West Africa has been performed in rhesus monkeys. The treatment is a modified version of a drug developed against an earlier strain of Ebola. The researchers say that, as the modifications necessary to alter the drug are relatively straightforward, the treatment could be adapted quickly for use against future strains of the virus.

The current outbreak of Ebola has proved far more deadly than all previous outbreaks combined, with over 10,000 deaths documented so far. There is no accepted vaccine or treatment, although several experimental treatments have been used on infected European and American medical staff. Many of these were developed to treat the Kikwit strain of Ebola isolated in Central Africa during a 1995 outbreak. Genetic differences could limit the effectiveness against the current Makona strain, and as doctors often used multiple treatments in parallel, it has been impossible to verify in the field whether a particular treatment has helped a patient or not.

Thomas Geisbert of the University of Texas, US, and colleagues adapted a treatment they had previously developed to treat the Kikwit strain to target the Makona strain. The treatment is a short interfering RNA (siRNA), which binds to a segment of the virus's messenger RNA and prevents it being transcribed into a protein, thereby preventing a viable virus from being formed.

Once the genome of the new virus had been sequenced, the researchers altered the base-pair sequence of their siRNA and produce several hundred doses of a new siRNA within 8 weeks. They tested the treatment on six infected rhesus monkeys: three that received the treatment after 72 hours survived, whereas those that did not became so ill they had to be euthanized. The treatment is now being tested in patients in Sierra Leone, and Geisbert says that the ability to make small changes quickly could be useful for future outbreaks.

'This is designed as a platform technology', says virologist Gene Olinger of Boston University, US. 'These researchers were able to use sequencing to determine the changes from the previous product, fix them pretty quickly and move towards a new product for a virus that's currently circulating – that's great for the industry.'

Kartik Chandran of Albert Einstein College of Medicine, US, warns that the mutation problem would make it difficult to stockpile doses against future epidemics, and says newer drugs currently in development target factors in host cells that the virus needs to replicate. ‘But we don't have those yet,’ he adds, ‘and we do have these RNA-based therapies.’