Scientists in Germany have observed a single molecule of HCl dissociating into its component ions in water - and have discovered that just four water molecules are needed for complete dissociation of the acid. The team say that their findings, made under ultracold conditions, should help scientists understand nanoscale chemical transformations at very low temperatures, including those occurring in stratospheric clouds and interstellar media.

They found that just four water molecules are required to obtain charge separation of HCl into a positive hydronium ion and a negative Cl- ion. Hydronium ions are an important ingredient in many chemical reactions but until now it was not clear how many water molecules are required to complete this charge separation. What’s more, a new reaction mechanism was found that explains dissociation even at ultracold temperatures which the team named ’aggregation induced dissociation’. 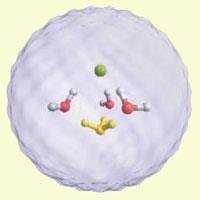 ’Our results provide a route for the understanding of chemistry at cryogenic and ultracold temperatures,’ says Martina Havenith, who led the study. ’The results are of interest for a wide community including chemistry, astronomy, atmospheric science and physics, where the field of ultracold reactions is rapidly gaining interest,’ she adds.

The team made their discovery by embedding HCl and individual water molecules in an ultracold trap composed of nanodroplets of superfluid helium - which have a temperature of less than -272.8?C (0.37K). Having trapped the molecules within the helium droplets, the team used infrared laser spectroscopy to look for the spectral peak corresponding to the H3O+ ion - finding the signal in clusters of just four water molecules.

’Understanding how acids undergo their prototypical reaction from neutral (HCl) to ionized species in water is central to much of chemistry because acid-base chemistry is so pervasive to what we do,’ says Timothy Zwier, a physical chemist at Purdue University, West Lafayette, US.

’Others have searched for such zwitterion [electrically neutral compound that carries positive and negative charges on different atoms] formation in molecular clusters unsuccessfully, but theoreticians had predicted the possibility that only four water molecules might suffice for the reaction to proceed spontaneously,’ adds Zwier. ’The work from the Havenith group provides evidence that indeed this is the quintessential smallest droplet of water in which HCl can undergo its acid-base reaction,’ he says.