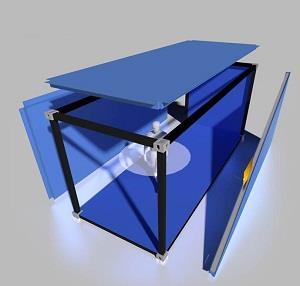 Steel shipping containers may one day be scrapped in favour of lightweight, tamper-proof alternatives made of composite materials with embedded sensors. Researchers in Italy are currently testing prototype ‘smart boxes’ that they say could be greener, cheaper and safer than traditional containers.

Every year cargo ships carry over 100 million container shipments of all over the world. As the ships get bigger, and trade continues to grow, it is getting harder to keep tabs on the contents of individual containers, which can be vulnerable to theft, smuggling and even terrorist attacks.

Stephan Lechner and colleagues at European commission Joint Research Centre think better container materials could provide a solution. They have developed smart boxes – containers made of composite fibreglass panels slotted on to a carbon fibre frame. ‘These containers could be up to 50% lighter than steel,’ Lechner told delegates at the 2014 meeting of the American Association for the Advancement of Science (AAAS), ‘which could significantly reduce CO2 emissions'.

He says that infrared or vibration sensors can be embedded into the walls of the container to monitor the goods or detect if a box is broken into. Unlike steel, the composite panels are electromagnetically transparent, so information from sensors inside the box could be transmitted wirelessly. ‘We eventually want the system to be energy autonomous,’ says Lechner. He suggests that the boxes could provide their own power from piezoelectric devices.

Replacing steel could also make shipping cheaper in the long run. Smart boxes would cost about three times as much to make as steel containers, but being cheaper to transport than steel they would pay for themselves in approximately 120,000km (roughly three trips around the world) – a tiny fraction of the lifespan of a typical container.

Todd Brethauer, a science advisor for the US government’s Combating Terrorism Technical Support Office, agrees a sensor network could improve container security, but is unconvinced the materials Lechner’s team are using are tough enough to withstand the mechanical stress or harsh weather conditions that steel containers do. Lechner says the team are still testing the structural performance of their prototypes, so the boxes have not yet been tested in harsh outdoor environments. The next step will be to see how they perform in situ.