Researchers in Australia have created a soap-like catalyst that mimics and even outperforms a hydrolase enzyme. The approach could replace enzymes in detergents to give them a longer shelf life and it might even lead to blood clotting agents for healing wounds.

Scientists have made progress in mimicking enzymes that promise to be better than traditional catalysts, for example producing methanol using less energy and at a lower cost. However, imitating hydrolase enzymes – which speed up the breaking of bonds in the presence of water – has remained a challenge owing to difficulty in bringing together different functional properties of their active site.

Now, Luke Connal and his team at the Australian National University in Canberra have developed a simple method to mimic the active site of a hydrolase enzyme in a soap-like catalyst. 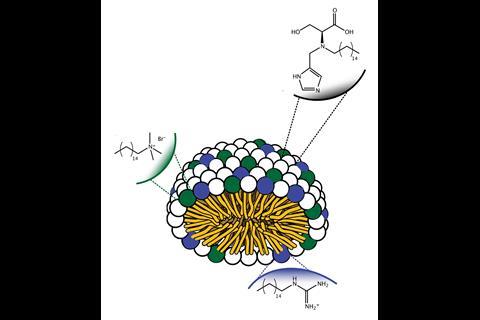 The micelle’s components each help to mimic aspects of the enzyme’s catalytic mechanism. For example, the hydroxyl, carboxylate and imidazole groups of one of the surfactant molecules (top-right)… 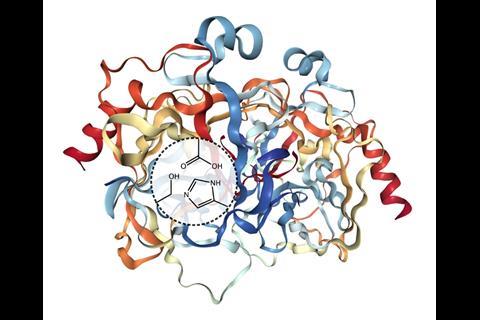 The team mimicked an enzyme called chymotrypsin that breaks down proteins in the gut. The active site of such hydrolases usually has a water-repelling binding pocket in which three amino acid residues are found close to each other, called the catalytic triad. Connal’s team therefore synthesised a surfactant molecule with three functional groups on its hydrophilic head – hydroxyl, imidazole and carboxylate, to mimic the serine, histidine and aspartic acid residues of the catalytic triad. When the soap molecules are added to water, they self-assemble into micelles whose surfaces are decorated with the artificial active sites.

Two other surfactant molecules were also added to confer other properties of the binding site, such as a hydrogen-bond donor that stabilises the transition state. The team also found that the micelle formation forced the key functional groups more closely together and into the micelle’s hydrophobic interior, mimicking the hydrophobic nature of chymotrypsin’s binding site. Experiments to hydrolyse a model ester revealed that the micelles had better catalytic activity than the natural enzyme. When any of the three surfactants were removed, the catalytic activity was greatly reduced.

‘We think we have a general approach to create mimics of a range of different enzymes,’ says Connal. ‘If we could create catalysts that only degrade a specific protein sequence then we could start to initiate biological cascades, for example blood clotting for wound healing.’

‘The catalytic results are exciting,’ comments Matteo Cargnello who develops catalysts at Stanford University, US. ‘This clever and versatile approach can be easily extended to several other functional groups and reactions, thus allowing exploration of a reactive space that has not been investigated in this way before.’