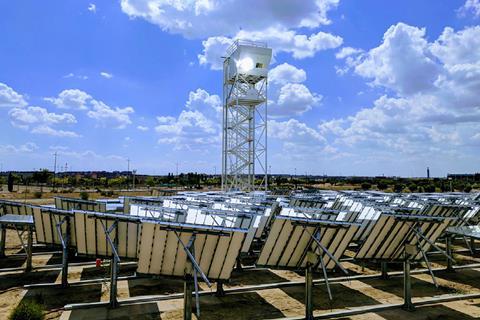 The reflectors deliver solar irradiation that is equivalent to 2500 suns to the tower, resulting in temperatures of 1500°C that can be used to split water and carbon dioxide and synthesise jet fuel

In a world first, kerosene has been synthesised using solar energy, water and carbon dioxide in a fully integrated solar tower setup. An array of 169 spherical reflectors concentrated solar radiation onto a reactor mounted on a tower near Madrid, Spain providing the thermal energy for the conversion.

The reflectors deliver around 50kW of solar radiative power – equivalent to 2500 suns – directly into the 16cm wide aperture of the reactor. ‘There are reflecting mirrors which track the sun and redirect and concentrate the solar radiation to the top of the tower,’ says lead researcher Aldo Steinfeld at ETH Zurich, the Swiss Federal Institute of Technology.

The cornerstone technology is the solar reactor, which was field tested on the rooftop of ETH Zurich in Switzerland in 2021. This system captured carbon dioxide and water directly from the air and turned it into a fuel. The solar reactor thermally reduces the redox material, cerium oxide, at temperatures of around 1500°C. The cerium oxide then reduces carbon dioxide and water as it enters the reactor, generating carbon monoxide and hydrogen – syngas – which is then processed to synthetic fuel using off-the-shelf technology.

‘This is the first time that kerosene was produced from air on a real solar tower, not from a simulator,’ notes Christian Sattler at the German Aerospace Center (DLR) in Germany, whose group worked with Steinfeld’s. ‘This is a big step ahead, as it is crucial for further scale-up.’ DLR operates two solar towers to develop solar fuels.

‘This is still a demonstration for research purposes, but this time it is at a technical size and uses a solar tower configuration that are relevant for industrial application,’ adds Steinfeld. The solar reactor is around 10 times bigger than the 2021 field test and generates around 1 litre of kerosene a day. Similar solar towers and heliostat fields already operate commercially and generate electricity by producing steam to drive a turbine. 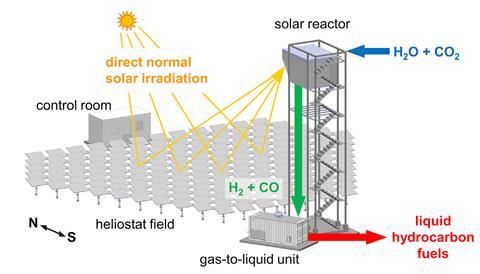 The solar reactor splits water and carbon dioxide to produce syngas, which in turn is processed to liquid hydrocarbon fuels using the Fischer–Tropsch unit at the base of the tower

In the new set-up, a solar-to-syngas energy conversion efficiency of 4.1% was achieved. ‘This is a record value for thermochemical conversion of solar energy into syngas, but still a low value for making the technology economically attractive,’ says Steinfeld. He predicts that within the next five years, ‘we should be able to show efficiency values exceeding 10% and, in the longer term, as the technology matures, reach values over 15%’.

The aviation sector is responsible for generating around 5% of greenhouse gas emissions so there is a need for carbon-neutral kerosene to substitute fossil fuels.

The ETH Zurich group plans to improve the conversion efficiency of their process in three ways. First, the researchers will improve the composition of the redox material, for example with doped ceria or perovskites. The second is to improve the reticulated porous foam-like ceramic structures made of ceria to enhance heat and mass transfer. ‘We are working now with 3D printed structures that are able to absorb solar radiation more efficiently and obtain a more uniform temperature inside the cavity reactor and therefore have a higher conversion from solar energy to calorific value of the fuel,’ Steinfeld says.

The third way to improve efficiency is to recover heat lost during the redox cycle, when temperatures drop a few hundred degrees below that needed for the oxidation step. This heat could be captured and rerouted to the solar reactor.

It is ‘very exciting to see this technology demonstrated at scale’, says mechanical engineer Jonathan Scheffe at the University of Florida, who saw a presentation of the research by Steinfeld at the International Conference on Solid State Ionics in Boston. ‘It gives a clear pathway towards what we need to do to make this commercially viable.’

Swiss company Synhelion, a spin-out from ETH Zurich, is building the world’s first industrial facility for the production of carbon-neutral solar fuel in Jülich, Germany. ‘The commissioning of the plant is planned for 2023 and Swiss International Air Lines will be the first airline to fly with our solar jet fuel,’ said a spokesperson. ‘After that, we plan to commission the first commercial production facility in Spain by 2025.’

‘This demonstration is first an order of magnitude larger scale [than previous setups], outdoors in a tower configuration, with full integration of the three subsystems,’ notes Ellen Stechel, a chemical physicist at Arizona State University, US. ‘Others, ourselves included, have imagined this fully integrated system on paper and performed analysis of what is possible,’ she adds. ‘However, there is no substitute [for] actual demonstration with all the real-world complexities. Hence for the broader field this work is a major step toward commercialisation.’