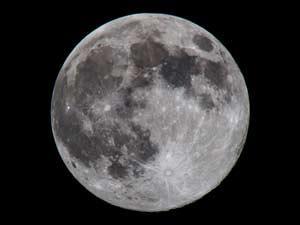 The majority of the water in the moon’s soil is created by the solar wind, according to researchers in France who have conducted detailed analyses of isotopic ratios using ultrasensitive mass spectrometry. Whether the solar wind can explain the water deeper inside the moon, however, remains a mystery.

Apollo spacecraft collected rock samples – both loose material on the surface, known as the regolith, and drill cores – from different sites on the moon. At the time, these were thought to be completely dry, but in 2008, researchers in the US used a new technique called secondary ion mass spectrometry (SIMS) to detect small quantities of hydrated minerals in the rocks. Various possible sources have been suggested for the water, one of which is the reduction of oxygen from silicates by the protons of the solar wind. Now, Alice Stephant and François Robert of the Institute of Mineralogy, Materials Physics and Cosmochemistry in Paris have used a new generation of ultrasensitive SIMS spectrometers to determine what proportion of the water in the moon’s regolith was produced this way.

The solar system’s water naturally contains tiny amounts of heavy hydrogen or deuterium. The solar wind, however, is a pure proton beam, so water it produces should contain only ordinary hydrogen. By measuring the ratio of the two isotopes in the water, therefore, it should be possible to ascertain where the water originated. However, a nuclear process called cosmic ray spallation produces deuterium, thereby modifying the ratio.

The researchers studied sub-millimetre sized grains of a rock called plagioclase from the regolith. Volcanic glasses in plagioclase contain lithium, which is a mixture of two stable isotopes – lithium-6 and lithium-7. Spallation increases the proportion of lithium-6. By measuring the lithium isotope ratio, therefore, the researchers could determine the amount of spallation each grain had experienced and infer the influence it had had on the hydrogen isotope ratio. They could then calculate each grain’s deuterium:hydrogen ratio without spallation and compare this with the proportion of water in the grain. ‘We see that there is higher water content when the ratio is lower,’ explains Stephant, ‘so we interpreted that as a signature of the implantation by the solar wind.’ The grains contained, on average, only about 15% water from other sources, the researchers concluded, with the majority containing no other water at all.

Planetary scientist Romain Tartese of The Open University, UK, is impressed by the researchers’ methodology and says: ‘Their conclusions are really, really sound regarding the minerals from the soils.’ He cautions, however, that ‘they don’t necessarily imply that the water present deep inside the crust and below that has the same source.’ Stephant accepts this and both Tartese’s and Stephant’s groups are now looking at whether similar techniques can provide any answers about water buried deep within the moon.