Spending on UK science and engineering continues to fall

The latest figures on UK spending on science, engineering and technology (SET) make gloomy reading for the new science minister Greg Clark. Investment continues to fall, as it has done since 2009.

In 2012, the government spent £10 billion allowing for inflation, according to new figures from the Office of National Statistics, previously published by the Department for Business, Innovation and Skills as the SET statistics. This is down 1% compared with 2011, in constant, rather than current, prices. 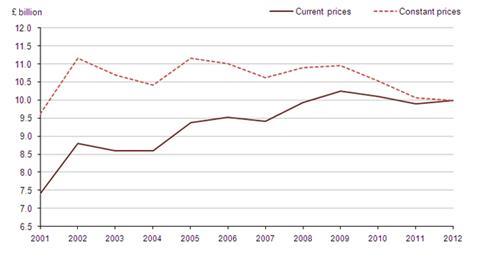 The latest figures show that spending on science, engineering and technology by the government has fallen 1%

‘The headline message for the minister, and indeed for all those with oversight of departmental R&D budgets, is that if we want to make the UK the best place in the world to do science, we need to see investment in science set on an upward trajectory as part of a long-term strategy,’ said Naomi Weir of the Campaign for Science and Engineering (CaSE). Historical and international comparisons show government investment in SET could be in better shape, she adds.

The new SET Statistics show that little has changed, says bioinformatician Andrew Steele, co-creator of Scienceogram, which campaigns for clearer reporting of government investment and policy objectives. ‘Investment in research has decreased significantly in real terms since the current government came to power. Working out exactly where the axe has fallen, and how hard, is made difficult by the complex way the figures are reported.’

Prospect, a union that represents engineers and scientists, is particularly concerned with the ‘damaging disconnect’ between budgeting for building important large-scale infrastructure but not setting aside money to run them, says Sue Ferns of Prospect. Future funding decisions should be motivated by strategic assessment of need, not favourable headlines, she says. ‘Government lacks a long-term strategy and investment plan,’ Ferns adds. ‘Funding for selected capital projects is no substitute for a co-ordinated approach that also provides stable funding for operational costs. Insufficient attention has been given to the need to ensure a suitably skilled workforce, including accounting for training costs and facilitating viable career paths.’