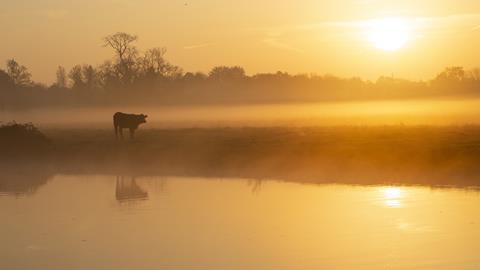 Spotlight shone on sped up photochemical reactions in droplets

‘Hot spots’ of light can greatly amplify photochemical reaction rates in aerosols, researchers in Switzerland have shown. The effect could explain deviations of atmospheric reaction rates from models and affect climate change predictions, for example. It might potentially also be relevant for photochemical synthesis.

Many of the photochemical reactions that regulate the Earth’s climate and influence air quality, such as the nitrate photolysis that leads to ozone pollution in cities, involve chemicals that exist in the atmosphere in sub-micrometre water droplets called aerosols. Researchers had assumed that the photochemistry occurred in the gas around the droplets, but in 2015 atmospheric scientist Alma Hodzic at the National Center for Environmental Research in Boulder, Colorado and colleagues observed secondary organic aerosols – molecules produced from parent organics in aerosols – being produced faster than gas phase models predicted. ‘In our work, we said, “We cannot explain the observations we have in the upper atmosphere if we do not take into account particle-phase photolysis”,’ explains Hodzic. ‘We did a global model in which we tried to photolyse molecules in the aerosols as though they were in the gas phase.’ This brought their model closer to their observations, but large uncertainties remained.

In 2016, physical chemist Ruth Signorell of ETH Zurich and colleagues demonstrated that some reactions could actually be accelerated inside droplets and suggested this could be due to optical confinement. However, they did not have a complete mechanism for the effect or investigate its impact on atmospheric reactions. In the new work, Signorell’s group model a droplet in an incident electromagnetic field. The droplet structures the electromagnetic field intensity by a resonance effect, developing a ‘hot spot’ towards the back. Owing to droplet rotation and – if the reaction is not too fast and the fluid not too viscous – molecular diffusion in and out of the hot spot, the reaction can happen faster than if it were occurring in a homogeneous light field. ‘This enhancement factor can be up to two to three and is highest when the wavelength of the light and the size of the particle are in the same range,’ explains Pablo Corral Arroyo, the work’s first author. ‘The light important for photochemistry is near-UV – 300-450nm wavelength – so the effect is most pronounced for sub-micron particles.’

To test this theory, the researchers exposed sub-micrometre droplets containing Fe(III) citrate to ultraviolet light, reducing the Fe(III) to Fe(II). Using a combination of x-ray microscopy and spectroscopy, they tracked the concentration of the Fe(III) throughout the droplet and showed that the reduction occurred much faster inside the predicted hot spot than outside it.

‘Models that try to simulate the chemical evolution of atmospheric particles can be wrong in terms of photochemistry because they do not consider these effects,’ says Arroyo. Moreover, researchers such as Richard Zare of Stanford University have studied aerosolisation as a synthesis tool. ‘I can imagine that if a company or industry wants to accelerate a photochemical reaction, this could be a way,’ he says.

‘When I saw this paper, I was very happy,’ Hodzic says. ‘This is a really detailed, process-oriented description that helps us to understand that the process could be even more important than the conservative value we had. I think I’m going to talk to them. They’re talking about the enhancement factor: what I want to know is the exact rate for different types of particles. If we can get that, we can make the particles more viscous, put that into our 3D models and start to look at the global impacts.’