Scientists have created the world’s strongest ferroelectric ferromagnet - a rare material that is electrically polarised while also having a permanent magnetic field. The new approach is an encouraging step towards developing these multiferroic materials for applications such as energy efficient computer memory, magnetic sensors and energy harvesting.

In 2006, Craig Fennie and Karin Rabe theoretically predicted that europium titanate (EuTiO3), which is antiferromagnetic, should exhibit both ferroelectric and ferromagnetic properties if grown as thin films on a substrate to induce a compressing strain on the material.1 Now, a large collaboration led by Darrell Schlom at Cornell University in Ithaca, US, have carried out experiments to confirm these predictions.2 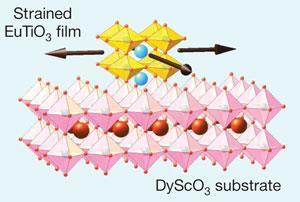 The team discovered that when  EuTiO3 was grown at a thickness of around 20nm on a slightly mismatched dysprosium scandate (DyScO3) substrate, the crystal lattice expanded by about 1 per cent. This created sufficient strain to cause the material to exhibit both ferromagnetic and ferroelectric properties 1000 times stronger than any previous known multiferroic material.

’Actually observing an antiferromagentic material turning into a ferroelectric and ferromagnetic material simply by straining it is quite amazing,’ says Venkatraman Gopalan, a member of the team based at Pennsylvania State University, US. ’Our work confirms a theory-driven new route to multiferroics where magnetically ordered insulators that are neither ferroelectric nor ferromagnetic are transformed into ferroelectric ferromagnets using a single control parameter of strain,’ he adds.

Being able to control magnetism with electric fields could be useful for next generation computer technology.  ’In hard drives, you need magnetic fields to switch magnets, which is very power expensive,’ explains Gopalan. ’Ideally you would want to do everything with 5 volts like in the rest of your computer, and a material that is both ferroelectric and ferromagnetic can allow that.’

The work is ’a magnificent example of theory-experiment collaboration in a field that is producing great results’, says Beatriz Noheda, a materials scientist at the University of Groningen in the Netherlands. ’Although the current example only works at temperatures below 4K, it represents a great breakthrough because it shows that the theory works and that the materials can be grown.’

Gopalan agrees that the next step is to increase the temperature at which such a ferroelectric ferromagnetic phase can exist. ’We need a material that will show this behaviour at room temperature,’ he says. ’Our theory collaborators are already predicting such materials and we are continuing to explore these predictions experimentally.’