US researchers have pioneered a new spectroscopy technique to uncover the precise sequence of atomic movements and structural changes that occur during complex chemical transformations.

The scientists used the new method to pin down the changes that occur when green fluorescent protein (GFP) glows under blue light, and say the approach could be used to further understand important chemical transformations in other complex molecules, as well as tailor new molecules.

"Knowing how each atom moves in real-time during chemical reactions has been a dream of chemists" - Tahei Tahara, RIKEN

GFP involves a classic intramolecular proton transfer reaction to produce its fluorescent form. This happens on an ultrafast timescale - from 10 femtoseconds to 10 picoseconds. Previously, it had been extremely difficult to perform structural measurements and determine the mechanism and pathway of any reaction occurring in this time range. But using femtosecond stimulated Raman spectroscopy (FSRS) the team say they have transcended this barrier for the first time.

’A great deal was known about the kinetics of the proton transfer reaction but little was known about the actual complexity of the reaction coordinate or combination of atomic motions that must occur before the proton can be transferred,’ says Richard Mathies, who led the research at the University of California, Berkeley, US. ’[But we] revealed the time resolved structural data which told us the actual atomic motions that are necessary.’ 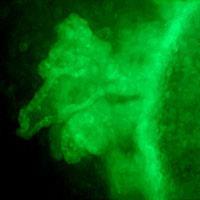 The team observed the structural changes by obtaining vibrational spectra of the GFP chromophore - the part of the molecule responsible for its colour - after it was raised to an excited electronic state by photon absorption. As the molecule proceeds along its chemical reaction coordinate, which is a result of protons transferring from one residue to another, the team could monitor the molecular vibrations.

The reaction coordinate was found to comprise the complex motion of many atomic groups in addition to the proton that is transferred. ’This complexity has long been predicted, but it was very difficult [or] impossible to directly observe experimentally until our development of the time resolved stimulated Raman technique,’ adds Mathies.

Since this new approach allows scientists to observe the atomic motions that occur after a molecule absorbs a photon, Mathies speculates that it could potentially be important in the development of photovoltaic devices and dye sensitised nanoparticles that are used to convert light into electricity.

’Knowing how each atom moves in real-time during chemical reactions has been a dream of chemists,’ comments Tahei Tahara, a molecular spectroscopy expert at the Institute of Physical and Chemical Research (RIKEN) in Saitama, Japan. ’This work shows a possibility that we will be able to know how structure changes in real-time - even in very complex molecules like a protein - using FSRS.’