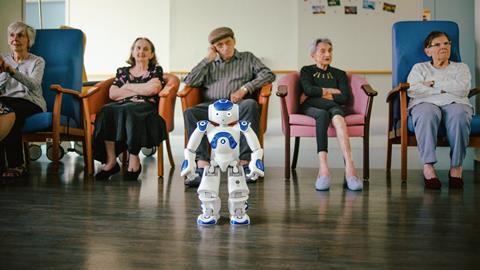 Do people trust scientists? The broad answer from the largest global study of public attitudes to science and health, is that the majority do.

But behind the bald headlines, the views of 140,000 people in 144 countries, who were questioned for the Wellcome study reveals some stark contrasts. Uzbekistan, Belgium and Tajikistan have the largest proportion of people who place a great deal of trust in scientists, while in countries in Africa – like Gabon and Congo – and eastern Europe – like Montenegro and Bosnia Herzegovina – more than 40% of the population have little trust in scientists.

Wellcome’s analysis reveals that levels of science education, economic inequalities, and trust in institutions all have an impact – although they don’t entirely explain the diversity of views across the globe. 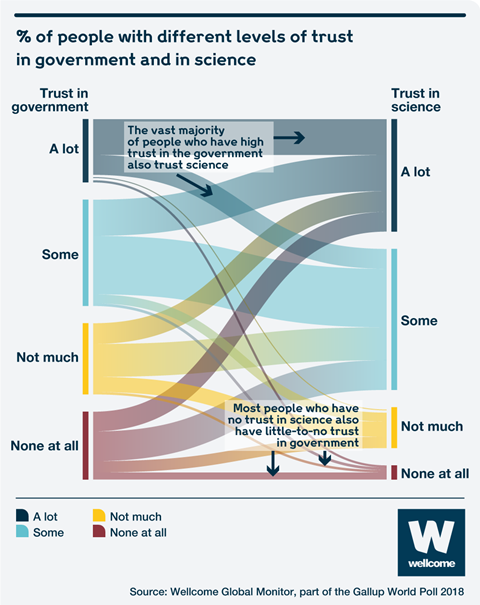 The level of science education was the biggest predictor of whether a person had trust in scientists, while those who considered themselves to be comfortably off were more likely to have a trust in scientists than those finding it difficult to get by. Those with confidence in the military, or justice system or national government had a greater trust in scientists.

Wellcome also looked at groups of countries’ views based on income inequality and found that trust could be as much as 20% lower in countries with high inequality, compared with nations with low inequality.

‘Wellcome has revealed the intricate and non-simplistic relations between social trust and trust in science,’ says Brigitte Nerlich, emeritus professor of science, language and society at the University of Nottingham. ‘I wouldn’t say scientists haven’t done a good enough job of communicating: what is much more important to see is where there is erosion of trust in public institutions – once that goes even the best science communication can’t stop it.’

People living outside the five biggest research sectors of the EU, US, China, Japan and Russia are twice as likely to have low trust in scientists. But even in these research-intensive regions there are variations with 35% of UK citizens surveyed saying they had a high level of trust in scientists, compared with just 11% in Japan. 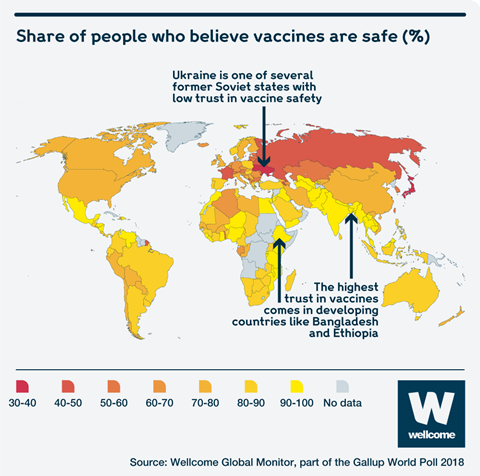 However, Wellcome also looked at attitudes to vaccination – often seen as a barometer of trust in the wider health and science system. Western Europe, which has some of the highest levels of trust in scientists, also has the most scepticism about vaccines, with one in five disagreeing that they’re safe. In France this figure rises to one in three.

Globally about seven in 10 people said the work of scientists benefits them, but more than a third of people in south America, north and southern Africa don’t believe it does and fewer than one in four in those same regions thinks science benefits most of their fellow citizens. This contrasts with almost eight out of 10 Danes, and six out of 10 Chinese, who think most people in their country benefit from science. Inequality matters again here with people in high income countries who are struggling to get by almost three times as likely to be sceptical about the benefits of science than those comfortably off.