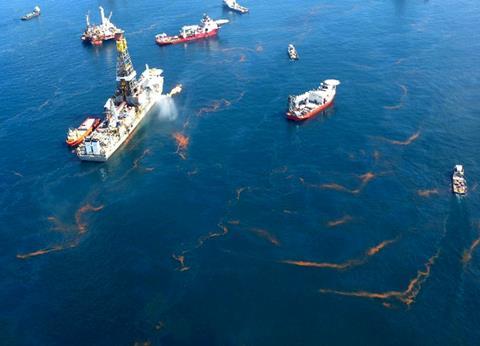 More than seven years have passed since the BP Deepwater Horizon oil rig exploded off the coast of Louisiana, spilling millions of barrels of oil into the Gulf of Mexico. Now, new findings are helping to answer unresolved questions about whether officials responding to the emergency made the right call when they injected more than 3 million litres of chemical dispersant at the rig’s wellhead.

The research, funded by the US National Science Foundation and the Gulf of Mexico Research Initiative – an independent programme sponsored by BP – suggests subsea dispersants lowered human health risks during the disaster intervention efforts. Previous research has indicated that the combination of dispersants and oil is more toxic than either one alone. The new analysis by US and Swiss scientists paints a rosier picture.

The scientists built and ran a mathematical model to determine what would have happened in the wake of the Deepwater disaster without the use of dispersants. It turns out that the subsea injection of dispersants decreased the overall concentration of all volatile organic chemicals in the atmosphere by 30%, and it also significantly reduced levels of aromatic hydrocarbons such as benzene and toluene.

Without the dispersant injection, the model revealed, benzene concentrations in the air above the sea surface would have been 13 times higher than the levels considered safe for humans. In contrast, the researchers determined that the dispersant injection resulted in atmospheric benzene concentrations that were 500 times lower than acceptable levels.

The scientists hypothesise that injecting the subsea dispersant led the turbulent jet of petroleum fluids to produce oil droplets that were about 30 times smaller than they would have been without dispersants. As a result, many volatile petroleum chemicals dissolved more quickly, and deep currents carried away most of the highly toxic benzene and toluene, which likely biodegraded within weeks.

Ed Overton, a professor emeritus of environmental sciences at Louisiana State University, is very impressed by these new findings. ‘This was an incredible piece of work,’ he tells Chemistry World. ‘There has been some anecdotal evidence, but this is the first hard science calculation based on chemical principles.’

The traditional three tools available to address oils spills are dispersing the oil at the surface, burning it and skimming it off. But Overton says this latest work proves that there is a fourth viable option: subsea oil dispersion. ‘This is going to provide good, hard evidence that subsea injection did work – good policy should be based on good science.’

Christopher Reddy, a senior scientist at Woods Hole Oceanographic Institution in Massachusetts and co-author of the new paper, emphasises that his team’s results should not be over-extrapolated. ‘We have to be really careful,’ Reddy says, noting that oil dispersants are a hot topic and highly polarised. ‘We have to be cognisant of that fact in the way that we frame our findings and communicate them, or it can get out of hand.’

Reddy says he and his colleagues have shown that the data and their modelling supports the idea that the use of subsurface dispersants improved the air quality around the Deepwater oil spill. ‘We don’t know, on the flip side, about the other potential impacts to the ecosystem when you use subsurface dispersants,’ he adds. ‘My fear is that this paper can be used by one group to immediately say that we don’t need to do any more science in this area.’

Meanwhile, the US National Academies has initiated a major study to examine the scientific evidence on the effects and efficacy of dispersants. Among other things, the review will include a characterisation of the relative risks to wildlife health of untreated oil and chemically dispersed oil. The two-year study kicked off in June.