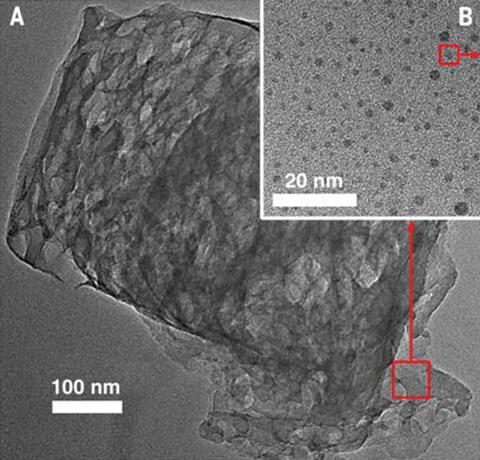 A new, more efficient way of using sunlight to split water into hydrogen and oxygen has been developed by researchers in China and Israel.1 The water is first oxidised to hydrogen peroxide, which is then decomposed by a cheap chemical catalyst. The researchers believe the process, which needs only cheap, stable and environmentally friendly catalysts, is already among the most viable photolysis techniques, but that it has significant scope for optimisation too.

Producing hydrogen from sunlight is challenging. The best-known procedure is photoelectrolysis: a photovoltaic cell captures the energy from the photons and the potential difference is used to split water. The minimum energy needed is 1.23eV, but the direct water-splitting reaction proceeds by a complex, four-electron pathway, so a voltage of around 2V is required to achieve a respectable reaction rate. This can call for three or even four solar cells, which increases the expense.

A simpler option is photocatalysis, in which a powdered light-absorbent catalyst is simply suspended in the water, absorbing photons and catalysing the splitting process. This is, in principle, much cheaper and easier to industrialise. However, many photocatalysts are less than 0.1% efficient, require expensive materials, such as gold, or stop working quickly, often because side reactions, such as hydrogen peroxide production, poison the catalyst.

The new catalyst has a solar-to-hydrogen conversion efficiency of 2%. The best water-splitting photocatalyst to date is nanocrystalline cobalt oxide, which has a conversion efficiency of around 5%.2 However, this began to lose its activity within 1 hour. The current photocatalyst, however, showed no degradation after 200 days. The researchers calculate that if they optimised their photocatalyst so it had a 5% conversion rate this would lower the cost of hydrogen production to $2.30/kg (£1.50/kg) – well below the US Department of Energy’s target of $4/kg. ‘Even at this stage, the number we get is only about $6,’ says co-author Yeshayahu Lifshitz, now at Technion – Israel Institute of Technology.

Steve Dunn of Queen Mary University of London, UK, says that the material is ‘a complete game changer’. Erwin Reisner of the University of Cambridge, UK, points out that hydrogen peroxide itself is a valuable industrial bleach and disinfectant, and suggests it might be interesting, therefore, to investigate ways of removing hydrogen peroxide from the surface of the catalyst without decomposing it.