Super-reducing solvated electrons made with an LED

Solvated electrons are even stronger reductants than metallic sodium, and can trigger reactions that are hard to achieve with ordinary reagents. Now, their extreme reducing power might be accessible to many more chemists, thanks to a photocatalytic system developed by researchers in Germany.

A team led by the Martin-Luther University of Halle-Wittenberg’s Martin Goez recently developed a catalytic technique that can produce solvated electrons in a sustainable manner using visible light. But the method relied on a powerful Nd:YAG laser – and with a set-up cost of around £20,000 this posed a significant barrier to the majority of researchers.

Now Goez and his co-workers have reformulated their catalyst so that it can produce hydrated electrons when illuminated with a green LED, a significantly cheaper source of light. 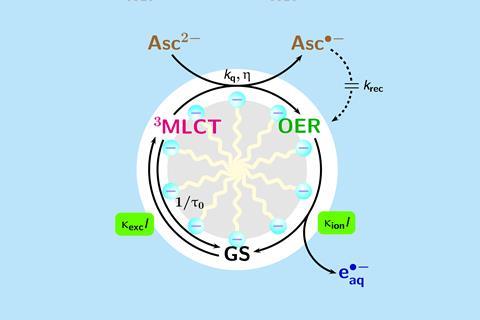 A new way of generating hydrated electrons uses a green LED as the light source rather than a £20,000 laser

‘In our earlier attempts we had to resort to a 100MW pulsed laser, which no synthesis lab in the world routinely uses,’ says Goez. ‘Achieving the same with an LED, which even a teaching lab can afford and operate, means that hydrated electrons are now generally available.’

The system requires two photons to interact with the catalyst to produce the hydrated electron. By incorporating the catalyst into an anionic micelle of sodium dodecyl sulfate, the team increased the stability of the species formed when the first photon hits. This gives more time for the second photon to arrive and eject the electron and enables the catalyst to work with lower intensity light.

The new system is ‘a big step forward’ says photocatalysis researcher Burkhard Koenig from the University of Regensburg, Germany, who was not involved in the project. He believes that the new approach will enable practical applications, for example in the decontamination of water-soluble toxic waste compounds. ‘[It is] fascinating to see how a dynamic interface – the micelles – changes the lifetime and stability of reaction intermediates by orders of magnitudes,’ Koenig says. ‘I am sure it would pay off to explore such effects for other chemical reactions.’