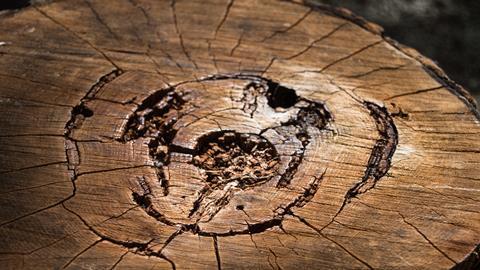 A long held hypothesis that bacteria, and not just fungi, are involved in the decomposition of lignin, a tough structural component of wood, has finally been confirmed. The work could help unlock the economic potential of lignin allowing these complex organic polymers to be turned into useful chemicals.

The team from the University of British Colombia, Canada, used a novel blend of stable isotope probing and metagenomics. By labelling several synthetically produced woody biomass substrates, including lignin, with a carbon isotope the researchers discovered which soil microbes incorporated the label into their DNA by sequencing them. They were able to confirm their role in decomposition while simultaneously identifying bacteria and enzymes involved. This technique circumvents the need to culture bacteria, a long standing barrier to bacterial identification.

‘There’s been a controversy in the literature for quite some time as to how important bacteria might be,’ says study authour William Mohn. Bacteria’s role in lignin decomposition has been suspected since the 1970s but due to its complex structure normal experimental methods have proved difficult. However, this new approach by Mohn and colleagues showed that bacteria from the families Comamonadaceae and Caulobacteraceae are involved in lignin degradation and that most species are highly specialised, often incorporating only a single label from one lignin polymer.

For Mohn, the motivation for this research is, first off, curiosity about soil ecology but also biotechnology applications. ‘Bacterial enzymes have many advantages in biotechnological applications and it may be much more practical to employ bacterial enzymes, rather than fungal ones for the breakdown of lignin.’

Lignin is difficult to breakdown and right now its potential is largely wasted. This could all change, Mohn explains, ‘if we can engineer bacteria to convert lignin into commodity chemicals the whole concept of a biorefinery becomes more economically viable and environmentally sustainable’. Lignin, once broken down, can be used to make many products currently produced by petroleum. Unlocking these molecules then replaces petroleum and reduces dependence on fossil fuels.

Mohn is now working to isolate and test the industrial application of the new found enzymes but the results are also exciting for soil ecologists interested in carbon cycling. ‘If we want to target our carbon dioxide emissions we really need to understand the natural carbon cycle, of which terrestrial decomposition is a big player,’ says Kathe Todd-Brown, a computational biogeochemist at Wilfrid Laurier University in Canada. She adds that these results can feed into decomposition models to improve them. By knowing what is breaking down what in the soil, ‘hopefully it will help us to better project how carbon dioxide flux will evolve from the soil under different conditions’, says Brown.

Correction: The affiliation of Kathe Todd-Brown was updated on 5 December 2018 as she is no longer at PNNL