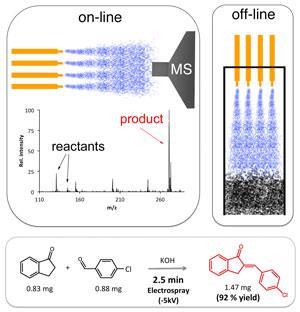 Chemists have used mass spectrometry, commonly used to analyse molecules, to synthesise them on the microscale.

Electrospray ionisation is one way to create charged ions for mass spectrometry, which can identify molecules in a urine sample, for example, by their mass. To make some compounds in that sample easier to spot, scientists add reagents that react with those compounds as they enter the instrument. The reaction alters the mass of the target molecules so that they stand out from others in the mixture.

Thomas Müller, of the University of Innsbruck, Austria, and Graham Cooks and Abraham Badu-Tawiah at Purdue University, US, wanted to push these mass spectrometry-driven reactions further to build milligrams of material.

The researchers mixed 1-indanone and 4-chlorobenzaldehyde with catalytic amounts of hydroxide. They then tracked the formation of 2-(4-chlorobenzylidene)indan-1-one in this benchtop reaction using mass spectrometry. The scientists also ionised some of the initial reaction mixture using electrosonic spray ionisation and collected the ions on glass wool. Then they removed the compounds from the wool and analysed the mixture using mass spectrometry.

Collecting ions for two and a half minutes, the researchers gathered about 1.5mg of the product containing a new carbon–carbon bond. The comparable benchtop reaction took several hours to complete. Cooks hopes this work will show synthetic chemists that mass spectrometry is just another way of handling materials, whether for analysis or synthesis.

But if electrospray ionisation triggers chemical reactions, could reactions between molecules alter analytical results? That depends on the amount of molecules in the charged droplets, Cooks says. To use electrospray for synthesis, scientists tailor the reactant concentration or the size of the sprayed droplets so that each drop contains all the necessary reactants, he adds. The reagents are not as evenly distributed among the droplets in ordinary analytical mass spectroscopy.

‘It’s a completely new use of electrospray,’ says analytical chemist Renato Zenobi, at ETH Zurich in Switzerland. This method could be useful for quickly building variations of a compound for drug discovery, he adds.

Richard Zare, of Stanford University, US, is excited to see the increased reaction rate for the mass spectrometer reaction, possibly partly due to concentrating the reactants as the liquid in the charged droplets evaporates. That means electrospray ionisation could be used to study slow solution-phase reactions using mass spectrometry, as has been done for intermediates in ruthenium-catalysed reactions, he adds.