Chemists at Harvard University have succeeded in synthesizing the antibiotic moenomycin A from scratch. They hope that by providing easier access to this molecule and its variants, they might aid the development of new antibiotics based on its structure.

Moenomycin A inhibits a crucial step in the synthesis of the peptidoglycan material which is used to build bacterial cell walls. It does this by inhibiting transglycosylase enzymes, which are only found in bacteria - this specificity could make it a very useful drug. 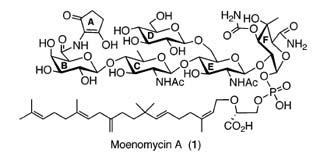 Over 30 years, researchers such as Peter Welzel at the University of Leipzig, Germany, have studied possible synthetic routes towards this antibiotic, but without finding a path that would allow them to make the whole molecule. The key difficulty is that some of the five sugar rings making up the molecule carry functional groups which are highly sensitive to the chemical conditions commonly used to link sugars together.

Daniel Kahne’s group at Harvard has now achieved their total synthesis using a new general strategy, and also a number of tricks in the individual steps. Only one of the links between sugar rings was achieved by standard protocols. The others required special measures, such as an ’inverse addition’ protocol that reverses the roles of the reactants.

Kahne came to the study of moenomycin from earlier experience with another antibiotic, vancomycin. Having identified variants of vancomycin that can kill vancomycin-resistant bacteria, he suggested that these compounds act by inhibiting transglycolases, just like the natural compound moenomycin A.

Kahne says there were many reasons that led him to try the moenomycin total synthesis. ’Moenomycin has an unusual structure, and one reason we chose to try to synthesise it simply has to do with the challenge of putting it together,’ he told Chemistry World. ’We are also interested in which portions of the molecule are critical for binding to the bacterial transglycosylases. Moenomycin has a very long phosphoglycerate lipid tail and we wondered if the whole structure is necessary for inhibiting the enzyme or if could be replaced by other, simpler, elements,’ he added. ’Our synthesis will allow us to look at different features of the molecule to see what is important for both enzyme inhibition and biological activity.’

Peter Welzel welcomed the long-awaited breakthrough: ’Kahne’s synthesis is a remarkable piece of work,’ he said, and neatly demonstrates the efficiency of Kahne’s method of joining moenomycin’s sugar rings together. One of the reasons why the moenomycin antibiotics have so far been neglected by the pharmaceutical industry is that they are poorly absorbed by the human body.

Welzel hopes that the new synthetic access route may help to change this. ’The results may help to prepare analogues which have more suitable pharmacokinetic properties than the natural product itself,’ he said.