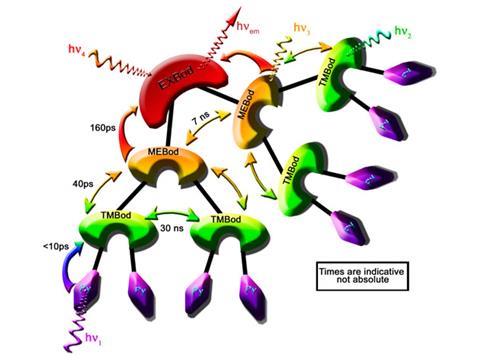 Researchers in the UK and France have developed a dye-based molecule that mimics the light harvesting complex found in plants. The system is designed to absorb all wavelengths of light which could allow for small yet powerful solar cells that work well in low light and even indoors.

A major limitation of solar cells is that most require high light intensities because they are poor at holding on to electrons. Moreover, much of the energy is lost through a phenomenon called photon annihilation whereby an excess of photons being harvested can't all be converted to chemical energy which causes high energy photons to form and undergo photochemical reactions which degrade the device.

Plants get around this problem by having light harvesting or antenna complexes that comprise an array of proteins and pigment molecules, including chlorophyll, which absorb photons and direct their energy towards a reaction centre to produce chemical energy. This allows plants to make food in dim light conditions, as well as high, while also protecting themselves from photon annihilation by storing the energy in their pigments. While attempts have been made to mimic this natural antenna system in photovoltaic cells using photosensitive dyes, it has been difficult to generate and stabilise the necessary molecules due to their complexity.

Now, Anthony Harriman at Newcastle University, UK, and Raymond Ziessel at the University of Strasbourg, France, and colleagues have developed a synthetic light-harvesting array. They used boron dipyrromethene (Bodipy) dyes and pyrene which appears to prevent photon loss and avoid formation of the highly energetic states that typically degrade a device.

'What is needed for a good solar cell is a steady supply of photons at an appropriate wavelength,’ Harriman says. ‘Our arrays are intended to collect all wavelengths, quickly convert UV light into far-red light avoiding reactive intermediates and channel the photons to the solar cell.’

The team designed a funnel-shaped molecule of 21 chromophores. When photons are absorbed at the periphery of the array, they cascade towards a terminal acceptor but their arrival is staggered as they move between chromophores. This bypasses the problem of photon annihilation.

'We see this as a great opportunity to build sophisticated networks that could direct the photons to sites where they are required – some kind of superior photon management akin to flight control at Heathrow,' adds Harriman. 'This is an entirely new concept for artificial photosystems and could have real implications for solar fuel production.'

Steve Dunn, who investigates energy harvesting materials at Queen Mary, University of London, UK, is impressed. 'It's one of the first studies that I've seen where they have taken the concept of antennas, synthesised the molecule and then managed to fully characterise it,' he says. 'They've shown that it has some significant advances in light harvesting and using sunlight to convert it into electrons.'