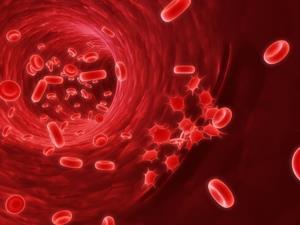 Nanoparticles that can stop internal bleeding have been developed by scientists in the US. The nanoparticles can be injected intravenously and activate the body’s natural clotting process. Eventually such treatments could be used to buy road accident victims and injured soldiers valuable time to get to hospital for surgical treatment.

Speaking at the American Chemical Society meeting in Philadelphia, Erin Lavik explains that her team at Case Western Reserve University in Cleveland began the project while looking at ways to treat central nervous system injuries. ‘We were looking at things like haemorrhagic stroke and wondering whether stopping the bleeding would stop the stroke progression.’

But it quickly became apparent that there were relatively few options for stopping internal bleeding. Freeze-dried blood platelets and biotech-derived versions of human clotting factors are used clinically but both have complications with production and storage, are expensive and neither work consistently.

So the team set about making nanoparticles that would stimulate the natural clotting process and stop bleeding. They made poly(lactic-co-glycolic acid) particles and covered them with an outer layer of poly(ethylene glycol). ‘That keeps them from sticking together, helps them evade the immune system and provides sites for presenting the peptide that targets activated platelets,’ Lavik says.

That simple platelet-targeting peptide, just five amino acids long, is based on one found everywhere in the body and it binds to blood platelets to help form a clot and stop bleeding. Once the nanoparticles coated in this peptide get to an injury site, they bind to the platelets and build a bridge between them to hold a clot together, helping it form quicker and stronger than it naturally would, closing wounds that would normally cause the victim to bleed to death.

In 2009, the team showed that they could stop bleeding from major arteries in rats in just over half the time it took without the nanoparticles. But Levik explains that a much more useful test is whether the animals can survive after a major trauma. For that they sliced off a section of rats’ livers under anaesthetic, then closed them back up and let the injury take its course.

Without treatment, 50% of the rats died within an hour, whereas with the nanoparticles, 80% survived. ‘That’s really exciting,’ Lavik says. ‘Now we’re not just stopping bleeding, but we’re having a clinical impact in a relevant model, because liver trauma is common in car accident victims.’

The next stage is a full-body trauma model, which simulates the effect of a bomb blast with damage to the lungs, kidneys and other organs. ‘That’s at a really early stage, but the animals that we’ve treated with the nanoparticles can survive three weeks without complications,’ Lavik says. ‘There’s still a long way to go in that study, but the early results are very exciting.’

‘One of the biggest problems with this kind of research is delivery and getting the material to the right place to form clots,’ comments Melissa Reynolds, who researches wound healing polymers at Colorado State University in Fort Collins, US. ‘It looks like they have that problem fairly well solved – and that’s very exciting, especially for the battlefield.’  Reynolds also adds that the fact that Lavik’s nanoparticles seem to be non-toxic and clear from the body within a few days is also encouraging.