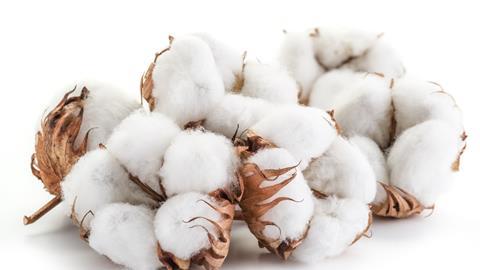 Researchers have developed a way to grow chemically modified cellulose fibres with fluorescent and magnetic properties using the natural machinery of the cotton plant and without genetic modification. The proof-of-principle approach could be adapted to other plants and organisms and pave the way for farms that grow smart materials, says the team. 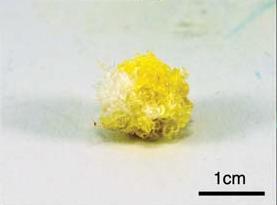 A cotton ovule whose fibres are made of cellulose functionalised with fluorescin.

Current approaches to make smart textiles rely on coating fibres with chemicals. However, the coatings eventually wear off and lose functionality. Now, Filipe Natalio at the Weizmann Institute of Science, Israel, and his colleagues have combined the biology of the cotton plant with synthetic chemistry to grow ‘smart cellulose’.

‘We chose the cotton plant because of its economic importance and long relation with humans,’ explains Natalio. ‘The question was: can we use the cellular machinery of cotton in our favour to produce fibres with tailored properties?’

Cellulose fibres are formed from glucose monomers that polymerise in the developing ovules of the cotton plant, so the researchers wondered if they could alter the monomer building blocks. They made two glucose derivatives containing different functional molecules, using simple peptide and sugar chemistry. One contained fluorescein – a yellow, fluorescent compound – while the other had a macrocycle containing a dysprosium ion – a rare earth element with magnetic properties.

Fertilised ovules are added to a growth medium containing the modified glucose molecules, which are then incorporated into the cellulose produced by the ovule.

The researchers then introduced the glucose derivatives into the growing medium of cotton ovules, and 20 days after fertilisation the cellulose fibres formed were fluorescent [under UV light] or magnetic. ‘The biology starts to work and process these modified molecules the same way as it does with the unmodified cellulose,’ says Natalio. The bonds between the functional moeity and the sugar monomer should make the material more resistant to wear. However, the fluorescent cellulose fibres were weaker compared to natural cellulose.

‘The concept has potential to spark a new “agricultural industrial revolution” bringing cleaner, possibly de-centralised ways to make functionalised biomaterials,’ comments Karen Edler at the University of Bath. ‘A greenhouse producing smart textiles for the next generation of performance clothing or textiles for anything from healthcare to home decor is an appealing alternative to another chemical manufacturing plant.’

Natalio hopes to move from in vitro cotton ovule models to real plants and establish the concept of material farming. ‘The idea is to have greenhouses growing hydroponic cotton in which each greenhouse produces cotton with different functionalities and these greenhouses are powered by renewable resources,’ he says. ‘We can envision wearable materials that can provide data storage, photo-actuactors, detectors of pollution and explosives.’