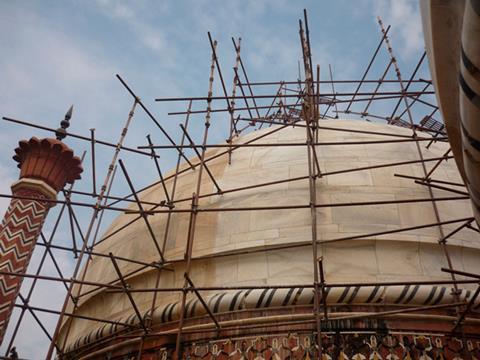 During the lengthy cleaning process, deposits that make the marble appear browner (seen on the left) are removed with clay

The pollutants responsible for discolouring the Taj Mahal have been identified by scientists in India and the US, who found that the deposition of particulate matter is responsible for the browning effect on its iconic white marble domes.

The Taj Mahal attracts millions of visitors every year, but over recent decades the marble has begun to discolour and darken, and every few years it must be cleaned by applying then removing a layer of clay. Poor air quality in the region has been generally thought to be to blame for the browning, but until now it was unclear exactly what was causing the colour change.

To investigate, a team led by Mike Bergin at the Georgia Institute of Technology and Sachchida Tripathi at the Indian Institute of Technology, Kanpur, used scanning electron microscopy to examine the particles deposited on small marble targets placed near the Taj Mahal, and also analysed pollutant particles from air samples taken nearby. They found that the browning effect was mainly due to the deposition of dust and organic (‘brown’) carbon particles – including those released by biomass burning of rubbish and wood and from vehicle fumes – which absorb light at the blue end of the spectrum, giving the surface a brownish appearance.

The team say now that they know exactly what is causing the problem, it may speed up the development of better prevention and cleaning methods.