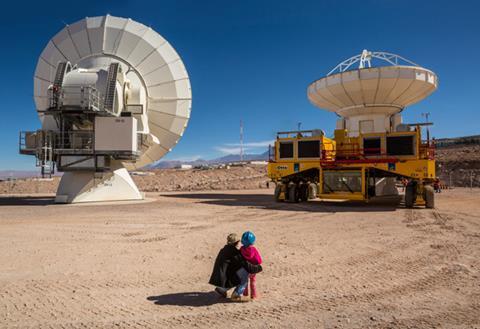 An international team of radio astronomers has detected the first faint trace of ionised carbon in the early universe. Discovered using the world’s largest telescopic array, the results suggest that early galaxies may have experienced a period of rapid change in the universe’s infancy.

Becoming fully operational in March 2013, the Atacama Large Millimeter/submillimeter Array (Alma) in Chile has already bore fruit for the astrochemical community, with reports last year of the telescope detecting the possible precursors to life in the molecular cloud Sagittarius B2. The telescope consists of 66 antenna dishes and can produce images with such a high resolution that only a single 14km wide telescope could achieve the same feat.

‘[Alma] falls into a class of telescopes called interferometers,’ says Peter Capak from Caltech, US. ‘What you do is use a bunch of smaller telescopes, in this case 12m dishes, and you combine the light from them in a coherent way to [replicate the effect] of a larger telescope.’

Capak says that what makes Alma special is its ability to capture microwaves emitted by dust and molecules in the far recesses of space. Previous efforts have failed to identify these molecules as telescopes haven’t been able to see the interstellar forest for the trees. ‘Given the resolution of [past] telescopes, there are too many sources emitting [in space], so you can’t differentiate one from the other,’ comments Capak. ‘They’re all sitting on top of each other.’

By exploiting the high resolution of Alma, Capak and his colleagues have managed to tunnel through this ‘confusion limit’ to identify the weak signal of ionised carbon in galaxies that formed only 1 billion years after the big bang. Alma was able to detect the CII emission line – a bright spectral signature for carbon emission from gas – in nine typical star-forming galaxies.

The team found that the thermal emission from these galaxies was less than a twelfth of that from slightly older galaxies. ‘We were able to conclude that they have much less dust in them,’ comments Capak. This suggests that these early galaxies were not chemically diverse as ionised carbon had not condensed into dust grains – the main ingredient in star formation. Given that slightly older galaxies contain a large amount of interstellar dust, the team argue that galaxies must have gone through an as yet unexplained period of rapid evolution to reach this point.

Jeff Wagg, a project scientist from the Square Kilometre Array project based in Africa and Australia, believes the Alma results are only the beginning of an exciting period in radio astronomy. ‘These are absolutely fantastic results,’ Wagg tells Chemistry World. ‘It’s showing us for the first time Alma’s potential for studying normal galaxies through their ionised gas emission lines.’ He also points out that Alma will be able to push back ‘observations to even earlier times’.