US and Chinese researchers have found that carbon nanotubes injected into male mice cause damage to the testes, but the harm is reversible and does not affect fertility.1 The work adds to the growing debate over the toxic effects of carbon nanotubes and their potential use for biomedical applications such as drug delivery vehicles.

Now, Bing Yan at St Jude’s Children’s Research Hospital in Memphis Tennessee, and colleagues in China have investigated the toxicity of carbon nanotubes on the reproductive system of male mice. The team administered up to 5 intravenous doses of water-soluble multiwalled carbon nanotubes to mice over a period of 13 days. Within 24 hours, nanotubes were found in the testis. By day 15, the nanotubes had caused oxidative stress and tissue damage, but by days 60 and 90, the damage had been repaired with no observed effects on hormonal levels, sperm health, or fertility. 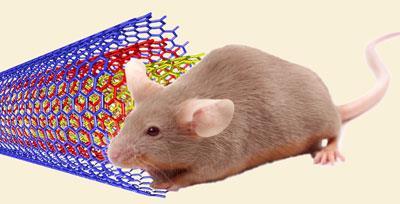 Krzysztof Koziol who works with carbon nanotubes at the University of Cambridge, UK, agrees that the work shows promise. ’Carbon nanotubes have the potential for a wide range of biomedical and pharmaceutical applications, therefore it is very important to demonstrate any possible health risks,’ he says. ’Importantly, the paper demonstrates no effect of surface treated nanotubes on the function of the animal reproductive organs, with respect to normal production of hormones and sperm.’

However, toxicology expert James Bonner at North Carolina State University in Raleigh, US, still has concerns over using carbon nanotubes for drug delivery. ’The authors clearly showed cellular stress and damage to cells in the testes, and while this effect was repaired and didn’t ultimately affect fertility, the study suggests to me that longer exposures, as would be used for drug delivery, might ultimately affect fertility.’

Yan admits that higher doses and a more frequent dosing schedule would likely result in cause for concern in terms of reproductive toxicity, adding that further studies on the reproductive toxicity of nanomaterials are urgently needed. ’How to evaluate the combined effects with other pollutants and factors and how to realise a quicker evaluation of nano-reproductive toxicity are all challenges facing future research in this area.’