Giving biosensors room to explore can improve their sensitivity, US scientists have found. The team used tethers to extend the speed and sensitivity of blood glucose detectors, and say they hope the same approach could improve the detection of cancer and Alzheimer’s.

A team led by Timothy Fisher at Purdue University have developed a new type of biosensor coined a ’nano-tetherball biosensor’ based on nanocube-shaped sensors tethered by conducting carbon nanotubes to electronic circuitry. ’We wanted to test this structure as a biosensor, and used glucose as our first test because the plentiful literature offers a good basis for comparison,’ explains Fisher. 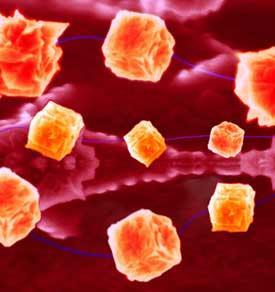 Tethered biosensors can reach out into solution

The team built the sensor from the bottom up, starting from a porous alumina support. The team grew individual single-walled carbon nanotubes in the tiny pores of the support, and as these grew they extended out of the pores and formed a loosely interlaced network of nanotubes on the support’s surface.

’Each nanotube tends to have a few defects along its length and when we electrodeposit palladium out of solution - in an electroplating-like process - the metal ions come down and find those defect sites on the nanotubes and form little clusters of metal,’ explains Fisher. ’We can control the process so we form small cubes rather than clumps of metal by having a moderate rate of metal deposition.’

Biocompatible gold is then electroplated on top of the palladium coating. Finally a linker ligand is coupled to the nanocubes, followed by the glucose oxidase enzyme - an enzyme that couples to D-glucose.

The detector behaves in a standard way, measuring the glucose concentration based on the electrocatalytic detection of hydrogen peroxide produced when glucose binds to the glucose oxidase. What stands this apart from what has come before is that ’the end the sensor itself is flexibly tethered to the support as apposed to being immobilised on a surface,’ explains Fisher. ’This means it can actually probe around the medium where you want to sense a target species.’ As the sensor can move short distances into the medium being analysed and is somewhat mobile it has increased sensitivity and gives a faster response, he adds.

In terms of sensitivity, it is ’significantly better’ than the commercially available sensors, says Fisher. But he did add that ’typical glucose sensing is for diabetes and one does not need an ultrahigh sensitivity most of the time’. This point is also echoed by Michael Strano, from the Massachusetts Institute of Technology, Cambridge, US, who says that increasing the sensitivity is ’not the scientific and engineering challenge in this field as glucose is present in blood at very high concentrations. The challenges are making such sensors biocompatible and long lived in vivo, a subject not addressed in this work.’

Looking to the future, Fisher says he may try to commercialise this sensor - but having proved the concept, he is also keen to explore the device for a wide range of other sensing systems, such as cancer and Alzheimer’s, by simply changing the enzyme attached to the nanocube.