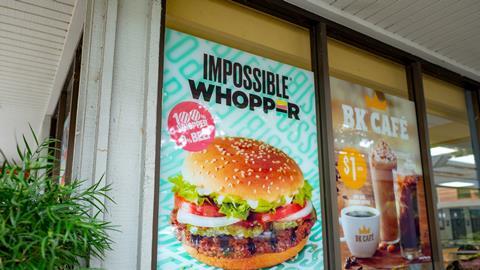 The ‘Impossible Whopper’ has a secret ingredient: chemistry

Yesterday marked the official release of the ‘Impossible Whopper’ at Burger King in the US. Instead of using ground beef, the vegan Whopper uses a plant-based patty which ‘bleeds’, and which tastes just like a real burger, according to some glowing reviews. The endorsement underscores recent progress in the science of making plant-based meat substitutes, as well as a shift in consumer consciousness toward a more environmentally friendly diet.

We want to reach as many people as possible, and Burger King is a great way to do it

Fake meat has come a long way over the last few decades. No longer the domain of dedicated tofu-eating vegans, the ‘alternative-protein’ market is expected to be worth in excess of $10 billion (£8.2 billion) by 2022, according to market analysts Meticulous Research. That’s in large part thanks to companies like Impossible Foods, the people behind the patty being used in Burger King’s new vegan Whopper. A silicon valley start-up founded in 2011 by a former Stanford University biochemist, Impossible Foods’ goal is ambitious: they say they want to eliminate the animal farming industry entirely by 2035. By their own admission, to do that they’ll need to scale the company up 100,000-fold.

‘It really started with the idea that making a delicious plant-based meat is a really important problem, because animal agriculture is so damaging,’ says David Lipman, chief science officer at Impossible Foods. The impact animal farming has on the environment is hard to understate – just over a quarter of all of the ice-free land on Earth is used for livestock grazing, and greenhouse gas emissions from animal farming make up about 15% of those attributed to humans, according to a UN report. With the human population expected to grow to around 10 billion by 2050, food production will need to substantially increase. Several studies published this year, including the UN’s sixth Global Environment Outlook report, stress the importance of a move away from a meat-based diet.

Consequently, Impossible Foods aren’t interested in making a product which appeals solely to vegans and vegetarians. Their target market is meat-loving omnivores. ‘The Whopper is kind of the archetype of the hamburger that everybody grew up with in America,’ explains Lipman. ‘We want to reach as many people as possible, and Burger King is a great way to do it.’ The idea is that every time a meat-eater opts for one of their burgers, they negate the damage caused by the production of a traditional beef burger.

A study conducted by Impossible Foods and reviewed by environmental consultants Quantis, claims that their burger uses about 95% less land, 85% less water and produces about 90% fewer greenhouse gas emissions compared with a traditional beef burger. But in order to make it appealing to meat-lovers, it’s necessary to get it right – to understand what gives meat its flavour.

‘One of the central developments was the discovery of the role that haem had,’ says Lipman. Haem is an iron-containing organometallic complex found in high concentrations in blood as haemoglobin and in muscle as myoglobin. ‘When you heat beef up, the myoglobin protein starts to unfold and the haem molecule starts to be able to access all the other molecules and catalyse a number of reactions and develop the flavours that we see in meat.’ The team found that haem-containing proteins were also plentiful in the root nodules of soybeans in the form of soy leghaemoglobin. However, digging up soybean roots is expensive and bad for the soil. To keep costs down and stay environmentally friendly, they had to try another method – fermentation. ‘We used [genetically modified] yeast to produce commercial quantities of haemoglobin. There was some tour de force work to make that efficient, and we’re getting more efficient all the time,’ says Lipman.

In the best possible taste

More goes into getting a burger right than the physical ingredients and texture. To know you’re on to a winner, it’s important that researchers are able to reliably quantify how the taste compares to the real thing. ‘How would you describe the flavour of beef?’ asks Lipman. ‘It’s hard.’ To do this, they turned to sensory science using panels of human tasters. 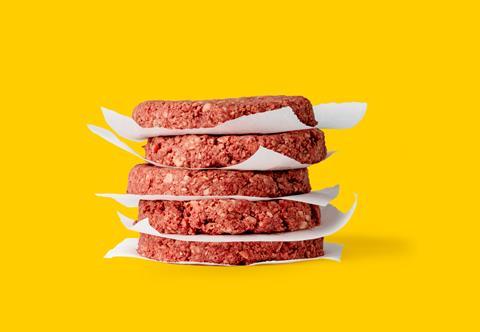 The Impossible Burger in the flesh

However, it’s a tricky job setting up a tasting panel compared with calibrating an instrument – something as innocuous as the colour of a room can change how something tastes, explains Lipman. One way to do it is to use a panel of volunteers who are trained to evaluate standards for bitterness, juiciness, saltiness and so on. By constantly testing and re-testing people on how they score the extremes of these attributes, you get a controlled lexicon for evaluating products. ‘Breaking that down in a quantitative way is really enjoyable,’ says Lipman. Another method is to use untrained, or partially trained volunteers, and to ask them to come up with the attributes they would use to describe the similarities and differences between dissimilar kinds of food. ‘The goal is to find a small number of attributes based on their discussions as to how they can make sense of the similarities and differences.’

Some sources are sceptical about how well the new Whopper will fare. ‘As an economist, it’s not clear to me who their market is or how big it is,’ says David Anderson, a livestock economist at Texas A&M University. Cost is the big sticking point for him. ‘It’s priced like a dollar higher. For people who are price-conscious, I think they’re going to look at that and say “you know what, I can get the real [Whopper] for a dollar less.”’

When it comes to meat-substitutes, Anderson says companies like Impossible Foods can expect real opposition. ‘I think there’s going to be a lot of resistance from farmers,’ he says. ‘They have a worry that it’s going to take away their livelihood, that it’s going to replace them.’

Examples of that resistance already exist, with meat industry lobbyists attempting to prevent plant-based meat products from using the word ‘meat’ at all. Impossible Food isn’t too worried though. They believe that at the end of the day, consumers will go for the best product. ‘I think that what we’ve seen in technology and innovation is that it’s kind of hard, if you make something better, to get people not to use it,’ says Lipman. ‘Where companies have tried to stop it, that’s not as useful if you want to stay in business as trying to make it work for you.’