Naomi Chayen, professor of biomedical sciences in the faculty of medicine at Imperial College London, UK, was a speaker at a British Crystallographic Association meeting in her home institution in December 2018. Clare Sansom caught up with her soon afterwards to find out about her career manipulating phase diagrams to produce high-quality protein crystals 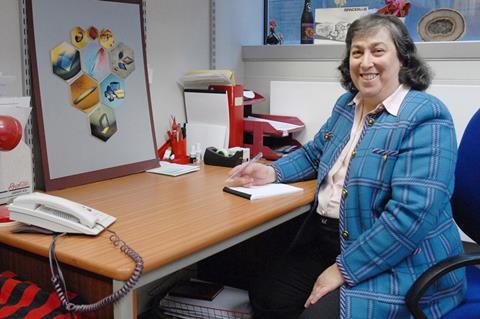 Serendipity plays a significant role in scientific discovery and, indeed, in almost every research career. Had it not been for a funding crunch as a postdoc, Naomi Chayen might well be enjoying a distinguished career in pharmacology. What began as an enforced change of direction led her into the completely different discipline that she has now made her own: protein crystallisation.

Chayen grew up in Israel and studied for her first degree in pharmacy at the Hebrew University of Jerusalem. She was a promising student, so much so that in her final year one of her professors asked her to go to the Kennedy Institute of Rheumatology in London to learn histochemistry with a view to helping him set it up in Jerusalem. She ended up studying for her MSc and PhD at the Kennedy Institute, frequently returning to her old department in Israel. Her first postdoc was in the biophysics department of Imperial College, working on muscle proteins. This research was successful, but her grant was not renewed. It was then that her boss’ boss – the head of biophysics, David Blow, who had studied protein crystallography with Max Perutz in Cambridge – called her in with an interesting proposal.

Blow was looking for a talented postdoc to work with him on techniques for crystallising proteins. At that time crystallography was the only reliable technique for determining their structure at atomic resolution, but the structures of the few that crystallise readily were known and obtaining crystals of others was unreliable and frustratingly slow. Far too often, crystallisation trials produced no crystals; tiny, powdery ones; or – even worse – beautiful large ones that diffracted poorly or not at all.

Despite knowing little physical chemistry and no crystallography when she began her work with Blow, Chayen realised the importance of the phase diagram of crystal formation.1 This illustrates how protein solubility depends on the concentrations of protein and any precipitant, and other adjustable parameters such as temperature and pH.

Chayen has now spent over a quarter of a century devising novel techniques that manipulate the phase diagram, causing crystals to grow. The first method she developed, together with Douglas Instruments, involved setting up tiny drops of protein and precipitant solutions under low-density paraffin oil; the denser protein solutions remain under the oil, where they are protected from evaporation and external shocks. This method was the first to enable crystal growth from nanolitre-scale drops. She remembers how its popularity grew by word of mouth: ‘There’s some crazy woman at Imperial doing something with oil… come over and get crystals!’ The method also gave her the nickname of ‘Professor Oil’ which she has enjoyed – or endured – for many years.

This high-throughput technique for protein crystallisation under oil is marketed by Douglas Instruments as the microbatch method; it is still the second most popular method for crystallising proteins, after vapour diffusion, and is cited directly in 1,790 entries in the Protein Data Bank. Importantly, it can work well with some of the most difficult proteins of all to crystallise: membrane proteins. 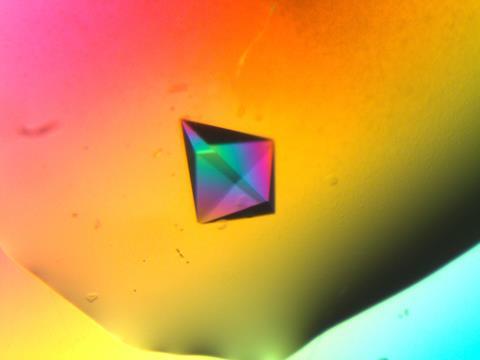 Crystals cannot form without nucleation, but if a protein solution spends too long in the nucleation zone of the phase diagram it will produce showers of tiny crystals that will not grow and are impossible to work with. ‘You can think of crystal growth like IVF; you want one or two healthy babies, rather than a pregnancy with many babies that are too crowded in the womb to thrive,’ explains Chayen. It is possible to bypass the nucleation zone by seeding protein solutions with non-protein nucleants; Chayen’s idea was to design porous materials that can to trap protein molecules in their holes. Once several molecules have been trapped, they can form nuclei that attract others to make crystals. ‘The pores will only trap protein molecules if they are of a similar size,’ she explains. Naomi’s NucleantsTM, sold by Molecular Dimensions, are porous bio-glass materials with the formula CaO-P2O5-SiO2 and protein-sized pores from 2–10nm in diameter.2 So far, they have facilitated the crystallisation of more than 20 proteins: more than any other single nucleant.

The holes in Naomi’s Nucleants have a mixture of shapes and sizes within the stated range. Chayen’s next step was to design materials that have specific affinity for proteins. Molecularly imprinted polymers (MIPs) are polymers formed in the presence of a protein that is extracted afterwards, leaving the protein’s imprint behind.3 They do not even have to be designed with one specific protein in mind. Chayen Reddy MIP, developed by Chayen with Sub Reddy, now at the University of Central Lancashire, UK, and marketed through Imperial Innovations, was designed to work well with most proteins in a given size range. Crucially, it is semi-liquid and so suitable for dispensing by robots in high-throughput crystallisation trials.

Protein crystallisation is still an important bottleneck in crystallography, but Chayen’s multi-disciplinary work has contributed much to its becoming more of a science than an art. Above all, her approach is practical. Microbatch crystallisation, porous nucleants and MIPs have provided very different solutions to the problem of persuading reluctant proteins to crystallise, and we can expect her to develop further, equally creative ones in the years ahead.