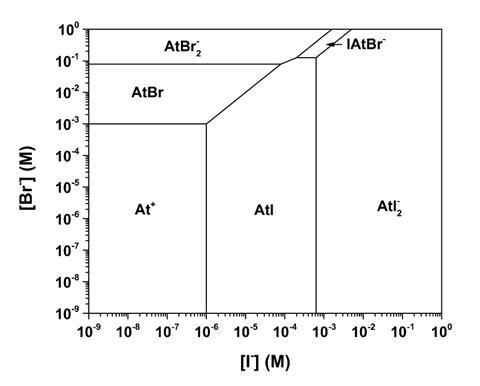 Theoretical chemists have calculated that a unique trihalogen species of astatine should form a viable structure. With only a narrow window of reaction opportunity predicted, the scientists headed for the lab to show that the stuff could be made.

Astatine is rare and nestles below iodine and above the provisionally named new heavy element tennessine, also known as ununseptium, in Group 17. To Nicolas Galland and Rémi Maurice from the University of Nantes, France, and colleagues, this rarity always implied that studying its chemistry would only ever be a theoretical affair. There is too little available, even with cyclotron production, to conduct conventional analyses. However, they used their quantum mechanical calculations to predict a narrow experimental domain in which an exotic ternary trihalogen anion, IAtBr–, might form. They analysed the outcomes of competition experiments and found that this species can exist and even predominate in aqueous solution with an equilibrium constant very close to that predicted.

‘This system not only constitutes the very first example of a ternary trihalogen species that involves the element astatine, but is also the first trihalogen species reported to predominate in solution,’ the team notes. Perhaps most intriguing, is that while the iodine and bromine are present as ions, the astatine is present in the zero oxidation state. Understanding the nature of astatine compounds is of fundamental interest, not only because they may lack analogues, but because relativistic effects alter their properties.

Relativistic effects in chemistry have been known since the 1980s – gold’s ‘yellow’ colour and mercury’s room temperature liquidity are down to electrons moving at relativistic speeds. These effects can now routinely be incorporated into calculations. Having used such theoretical studies to guide their experiments, the team looked at how the numbers turn out for quantum mechanical calculations for the iodine–astatine–bromine ion too. These showed that the ion appears to be viable but that the experimental route may be too restrictive to follow.

‘The computational studies and experiments conducted by this group over the past five or six years have brought forth information on astatine species that have made those of us in the field reconsider what we thought we knew about astatine chemistry,’ says Scott Wilbur of the University of Washington, US. ‘Knowledge of the astatine species in solution and involved in reactions is essential for moving this field forward. Confirmation of the species predicted by calculation is still difficult, but knowing the possible (or likely) species is very important.’

Trond Saue of the Paul Sabatier University, France, points out that this is ‘a quite exceptional collaboration between theoretical and experimental chemists exploring the largely unknown chemistry of this rare element’. However, he adds that the Nantes group is not the first to do this kind of trick. ‘It at least goes back to the Nobel prize winner Pople and the concept of isodesmic reactions,’ he suggests. Moreover, this ternary compound has not yet been found experimentally, rather, ‘the experimental team convincingly shows that the results of their competition experiment can only be simulated by assuming the presence of this species’.