Scientists in Europe and the US have designed a molecule that can be manipulated using light to carry out multiple and distinct logic functions. The multifunctional molecule, which can be reconfigured by light, could be used in data storage devices and biomedicine, including nanoparticle tracking and drug delivery.

Devens Gust of Arizona State University in Tempe, US, and colleagues in Sweden and Spain, created a molecule which can perform 13 different logic operations. Some of these operations can work in unison and the whole process is controlled entirely by different wavelengths of light. 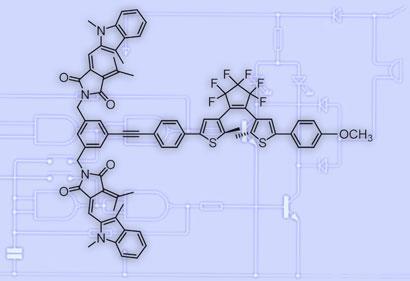 ’It is amazing to me that such a simple molecule can require so few different inputs and yet carry out so many different logic operations by careful choice of outputs,’ says Gust. ’These 13 operations have been implemented before, but only in separate molecules. The molecule we report can do them all, and in addition it uses only light for inputs and outputs rather than chemicals.’

The FG-DTE molecule comprises three covalently linked photochromic chromophores: a dithienylethene (DTE) and two identical fulgimides (FG). Shining different wavelengths of light on the molecule causes photoisomerisation of the three chromophores, thus making it possible to switch each of them into open and closed isomeric forms.

To test the system, the team used standard laboratory spectrophotometers and light sources and found that it could perform binary arithmetic using AND, XOR and IHN gates, and decoder and encoder functions required for storing digital information.

’Although these functionalities have been individually obtained with specific systems in the past few years, this work is the first to integrate all of them in the same molecular platform,’ says Alberto Credi, who investigates light operated molecules at the University of Bologna, Italy. ’Achieving a large degree of functional integration is a key objective for molecular logic because, unlike the elements of electronic circuits, molecular logic gates are difficult to connect together.’

’In principle, suitable photochromic molecules could be used to build computers or other data processing devices. In practice, such systems may never replace electronic materials,’ Gust says. ’However, a molecular logic device operated by light may find applications in nanotechnology and biomedicine where relatively simple logic processing may be needed at very small scale.’