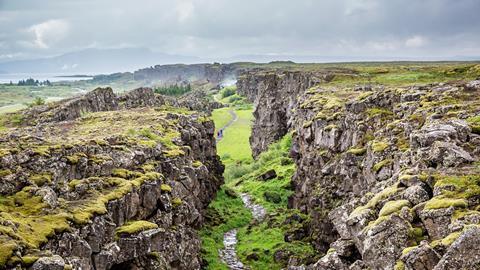 The Earth’s crust hasn’t changed much over the past 3.5 billion years, say researchers who have analysed the ratio of two titanium isotopes in ancient shales. Their findings suggest that plate tectonics started much earlier than most previous models suggest.

Geologists divide Earth’s crust into two broad classes of rock. Mafic rock, which makes up the ocean floor, is dense, dark and rich in minerals such as magnesium and iron. Continents comprise felsic rocks such as granite, which are lighter and richer in silicon and aluminium. Felsic rocks are produced when mafic rocks melt and recrystallize, which mainly takes place at subduction zones where tectonic plates slide over one another. Researchers previously believed plate tectonics did not begin on Earth until around 3 billion years ago, before which the crust was predominantly mafic.

Nicolas Greber of the University of Chicago, US, and colleagues, decided to investigate this by examining the composition of shale sediments, which contain particles weathered from the crust. Felsic rock contains a higher proportion of titanium-49 to titanium-47 than mafic rock, because titanium-47 is preferentially incorporated into minerals that crystallise out of magma at high temperatures, leaving the remaining melt, which eventually crystallises into felsic rock, enriched in titanium-49.

The researchers looked at 78 shale samples dating back as far as 3.5 billion years from all over the world. ‘We found that, since 3.5 billion years ago, felsic rocks have constituted the major percentage of Earth’s emerged crust,’ says Greber, who is now based at the University of Geneva in Switzerland. ‘Subduction zones are, in our view, necessary to produce this large proportion of felsic material.’

Greber and colleagues also used their findings to look at how the availability of various nutrients from rock weathering has changed. They detected a reduction of nickel-rich rocks between 3.5 and 2.25 billion years ago that would have drastically reduced the input of nickel to the ocean. Nickel is a metal cofactor in enzymes that microbes use for producing methane, so this could have reduced the number of these organisms. They also concluded there would have been an increased flux of phosphorus into the water column, potentially encouraging plant growth. Together, they suggest, these factors could have paved the way for the great oxidation event around 2.5 billion years ago, when Earth’s atmosphere changed from a reducing to an oxidising one.

’The variation in titanium isotopes as igneous rocks differentiate is quite spectacular, so it’s a great idea to use the titanium isotopes in sedimentary rocks to tell us the average differentiation of the Earth’s crust,’ says geochemist Roberta Rudnick of the University of California, Santa Barbara in the US. She is troubled, however, by the amount of scatter in the data, and wants to see more detailed study of highly weathered rocks to determine whether titanium isotopes are immune to isotopic fractionation over time. Regarding the great oxidation event, she notes that another recent study makes the ‘diametrically opposite’ suggestion that a predominantly mafic crust until 3 billion years ago actually suppressed the rise of oxygen before then. ‘This is not a settled argument,’ she concludes.