Saturn’s moon Titan is one of the most interesting objects in the solar system, not least because of the complex chemistry going on in its unusually dense atmosphere. Using spectroscopic measurements made during flybys of the Cassini craft, researchers in the US can now present first insights into the reactions that lead from methane and nitrogen to the formation of high molecular weight species known as tholins, which are believed to make up the orange fog that veils Titan’s surface. 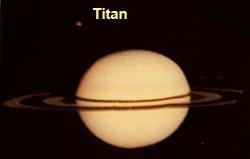 Previous mass spectrometry work conducted with Cassini’s Ion Neutral Mass Spectrometer (INMS), had already characterised the small molecules such as methane and nitrogen making up the bulk of Titan’s atmosphere, which is even denser than our own. Now, Hunter Waite at the Southwest Research Institute, San Antonio, Texas and colleagues have analysed additional data from the Cassini Plasma Spectrometer (CAPS), which in combination with INMS data allowed them detailed insights into the organic chemistry that goes on in the upper reaches of Titan’s atmosphere.

The CAPS instrument, which measures energy/charge ratios, enabled the researchers to detect larger molecules which had escaped the earlier investigations. They discovered key compounds including benzene, polycyclic aromatics, and very large (about 8 kD) negatively charged ions.

From these results, the researchers have derived a schematic reaction path for the formation of the tholins. High energy particles and UV light penetrating the upper parts of the atmosphere are believed to activate methane and nitrogen, the main constituents of the atmosphere, to form benzene and various nitrile compounds, following paths that may involve small molecules such as HCN, and/or small ions. Polycyclic aromatics and nitriles then react further to form the large negative organic ions, which appear to be suspended in the atmosphere as aerosols, and whose discovery the researchers describe as ’completely unexpected.’ From these aerosols, tholins could form and eventually settle down to the surface.

Astrobiologists are interested in Titan because the nitrogen/methane atmosphere is similar to that of Earth before life arose, and also because the complex organic chemistry on Titan might give us clues as to how prebiotic chemistry developed here, and how it led to the origins of life. To find out more about this, however, one would need further probes to visit Titan’s surface, of which Cassini’s lander, Huygens, only delivered the briefest glimpse.

’A complete chemical analysis of the surface material, including isotopes, should be a key focus of any future missions to Titan,’ says Sushil Atreya, director of the Planetary Science Laboratory, University of Michigan at Ann Arbor. ’Who knows, we may yet find those elusive prebiotic molecules.’