Adding a small amount of fluid to a runny liquid can thicken it, say researchers in Germany

Adding a small amount of an immiscible fluid to a suspension - solid particles dispersed in a fluid - tunes the consistency of the suspension. The method could be used to create low-calorie foods, say the researchers in Germany.

Controlling the flow or viscosity of suspensions is necessary to make various products including building materials, paints, and even food. Traditionally, surfactants or polymers are added which bind the particles together to stabilise suspensions. However, these can have environmental implications and add complexity and expense to the overall manufacturing process.

A cleaner approach is to add an immiscible fluid to the suspension to produce a gel-like consistency - the secondary fluid preferentially wets the suspended particles causing capillary forces to create networked clusters of particles connected by pendular bridges. Erin Koos and Norbert Willenbacher at the Karlsruhe Institute of Technology, in Germany, have now found that only very small amounts of a secondary immiscible fluid are required to achieve this. 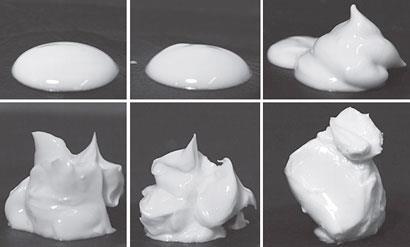 The team first dispersed hydrophilic glass beads in an organic solvent, diisononyl phthalate, and then added one weight per cent of water as a secondary fluid. By stirring the mixture, the viscous suspension changed to a gel-like liquid, confirming that the secondary fluid preferentially wets the particles.

’It further confirms that such particle and immiscible liquid mixtures are rich arenas for intriguing phenomena and novel applications,’ comments Wilson Poon who investigates colloids at the University of Edinburgh, in the UK. ’Since it is very difficult and expensive to eliminate moisture entirely from oil-based systems, or oily impurities from aqueous systems, it is possible that the kind of ’minority-component effects’ presented here are generic and widespread.’

Koos is now working to see how the technique could be applied to create low-calorie foods by replacing oils in food with water using just a small amount of oil to stabilise the mixture. ’Not only would this potentially make it a lower calorie food, but it would make the formulation a lot more natural by allowing us to add fewer emulsifiers to our foods or other products.’ Koos adds.