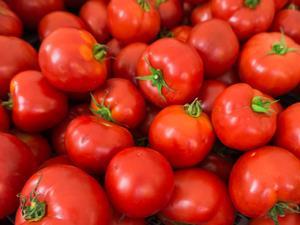 A microbial electrochemical cell that runs off tomato waste to generate electricity has been developed by researchers at the South Dakota School of Mines and Technology in the US.

In their device, bacteria are used to breakdown and oxidise organic material in ‘defective’ tomatoes that were landfill-bound. Electrons released as a result of this oxidation process, are captured by the fuel cell and can be harnessed.

The researchers have tested this technology on 100ml mini-scale reactors with electrodes that have a surface area of about 1–2m2. But the current power output from this new device isn’t very impressive. Lead researcher Venkata Gadhamshetty said 10mg of tomato waste yields only 0.3W. He suggested that the electrical output could be increased by ‘several orders of magnitude’ with further work.

Florida produces 360,000 tonnes of tomato waste every year, and the researchers calculate that this would be enough to power Disney World for 90 days, using an optimised microbial fuel cell.

Gadhamshetty told Chemistry World that, along with colleagues from New York, they’ve just contacted the New York State Prevention Pollution Institute. They want to work with a local food processer to use food waste to try and demonstrate the technology on a slightly larger scale. ‘It is still going to be a few litres,’ Gadhamshetty said. ‘We would like to transition these little prototypes into more advanced modules which could represent a good prototype for practical demonstration.’

Namita Shesthra, a graduate student in Gadhamshetty’s lab, said she comes from Nepal, where power can be cut off for as much as 20 hours in a day. ‘We cannot afford expensive technology for waste treatment and all, and this is really an inexpensive technology.’