Catalysts that are activated by a mechanical force tearing them in two have been designed by Dutch scientists. The team’s ultimate goal is to develop these catalysts for use in self-healing materials where damaging the materials - by tearing, scratching or bending - automatically triggers the start of the repair process.

The team, led by Rint Sijbesma from the Eindhoven University of Technology, have made a series of metal-based latent catalysts that are completely unreactive until activated. To activate them, ultrasound is applied to mechanically break the bond between the metal and one of its polymer chain-based ligands. ’The ligand is pulled off the metal to activate the catalyst,’ explains Sijbesma. 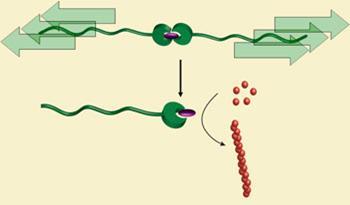 ’The most important application for these catalysts is in self healing materials,’ says Sijbesma. Self-healing polymeric materials already exist, but most require an external stimulus such as heat, light or the addition of chemical agent (such as an acid).

’Eventually we do not want to use ultrasound to activate the catalyst,’ says Sijbesma. Instead they are plotting something really quite clever. The plan is that the act of tearing, scratching or bending the material will cause one of the ligands to be ripped on the latent catalyst - revealing an active catalyst that can stitch the damaged material back together. This means that an external stimulus such as heat would not be needed to trigger the self-healing reaction, he explains. ’Ultrasound is being used to test the concept because it is one of the most efficient ways to apply mechanical forces in solution.’

’There are already systems that are activated by stress, where the reactants and the catalyst are stored in small capsules in the material, and then when the material is damaged the capsules break and reactants are released and come into contact with the catalyst that is already active,’ says Sijbesma. But his team would be the first to use latent catalysts in these materials, which should ’prolong the life-time of the self-healing activity’, he explains.

The team tested a variety of different ultrasound activated catalysts on a range of different organic chemistry reactions, but the one of interest for self-healing materials is ring opening polymerisation using a ruthenium-based catalyst.

The researchers were hoping that once the mechanical force (ultrasound, at this stage) had been removed, the polymer chain would reassociate to the metal, reforming the latent catalyst so it is ready to use again when necessary - as would be needed for the material to heal itself again if damaged twice in the same place. ’What actually happens is that the catalyst is so extremely active that it decomposes after a short time,’ explains Sijbesma.   During the reaction you continuously create small amounts of the catalyst that are active for a short time, and when you stop sonicating that small fraction dies away and the reaction stops. ’The reaction only starts again when you turn back on the ultrasound and start making new active catalysts,’ he adds.

Sijbesma has a lot of future plans for this work, including modifying the catalysts so they become more stable and can be switched on and off on demand, and improving yields by using more active monomers. ’We are also going to incorporate the molecules we have studied in solution into a polymeric material, and then break that material and see if we can activate the catalyst in that way.’

Wayne Hayes, an expert in self-healing polymeric materials, from the University of Reading, UK, says that this work is ’good development towards a self healing material.’ The real advantage of the work lies in the catalyst being truly blended within the polymeric materials, rather than in a capsule as is the case with earlier work, he adds. He does however warn that it may still be necessary for the monomer to be embedded in microcapsules. ’You are going to need a source of monomer that can polymerise, and I don’t think you could really have that blended in your polymer resin as there would not be enough diffusion within the polymer matrix to make an efficient polymerisation,’ he says. Sijbesma agrees that this would be a limitation in epoxy-like stiff materials, but in the case of softer rubber materials ’there might be opportunities to just blend in the monomer.’ He does admit, however, that ’long term migration, or "sweating out" of monomer will then be a potential problem.’