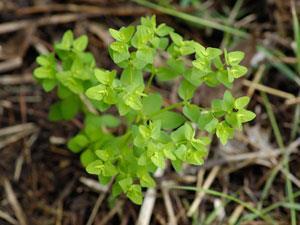 US scientists have developed the first efficient and scalable route for the total synthesis of ingenol – a plant-derived diterpenoid used to treat precancerous skin legions. The work offers cheaper and faster production of the drug than the current, inefficient plant extraction route, and could pave the way for the chemical synthesis of many other complex natural compounds.1

Ingenol is derived from the common petty spurge or milkweed, Euphorbia peplus. It has traditionally been used as a remedy for skin lesions, and its anticancer properties have long been of interest to drug companies.

Currently, it is inefficiently produced by isolation from E. peplus, and converted to ingenol mebutate and formulated as the drug Picato, a gel that treats actinic keratosis. Developing more efficient synthetic routes to produce this and other complex pharmaceutically-promising terpenoid compounds, has therefore been a sought after goal among organic chemists.

But while the first total synthesis of ingenol was described in 2002 by Jeff Winkler and colleagues at the University of Pennsylvania, US, this and subsequent research all required more than 37 steps and had low yields.2 Some researchers were sceptical that scaleable chemical synthesis of ingenol and synthetic derivatives was possible, suggesting that bioengineering routes are the way to go.

Now, Phil Baran's group at the Scripps Research Institute in La Jolla, California, has designed an efficient 14 step synthesis of ingenol that mimics the pathway taken by E. peplus. 'I think that most organic chemists had considered ingenol beyond the reach of scalable chemical synthesis,' says Baran. 'It was certainly unclear if we would ever be able to succeed.'

The team's synthesis takes a two-phase approach just like E. peplus.  First, a cyclase phase uses the inexpensive and widely available chemical carene to form the basic carbon framework of the molecule. This is followed by an oxidase phase which adds the important oxygenated functional groups to complete the synthesis. 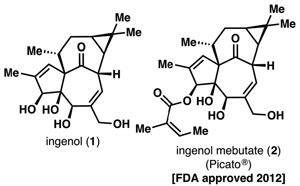 The method yielded relatively large quantities of ingenol, making it an efficient approach for the production of ingenol mebutate and other ingenol derivatives. The two-phase design also provides a significant amount of a key intermediate compound, allowing for efficient preparation of various ingenol derivatives without needing to go through the entire synthesis each time.

Winkler is impressed by the work. 'This synthesis provides, for the first time, a practical approach to the development of SAR (structure-activity relationships) for a highly promising compound class,' he says. 'It brilliantly demonstrates the power of organic synthesis to access derivatives and analogues of natural products that are not readily available, or not accessible at all, by manipulation of biological systems.'

'Baran’s approach allows the real possibility that pharmaceutical companies can use this chemistry to prepare significant quantities of material for the preparation of analogues and even for use in the clinic,' says Tim Donohoe, a synthetic organic chemist at the University of Oxford, UK.

The route is now being scaled up by Denmark-based LEO Pharma who manufacture the drug Picato and who approached Baran's group to conduct the research. 'The next job is to shorten the route even more, perhaps to 10 to 12 steps, and invent new analogues with improved properties,’ Baran says. 'There are many other complex natural compounds waiting to be synthesised using a strategy like this. This is really just a glimpse of the future of chemical synthesis.'