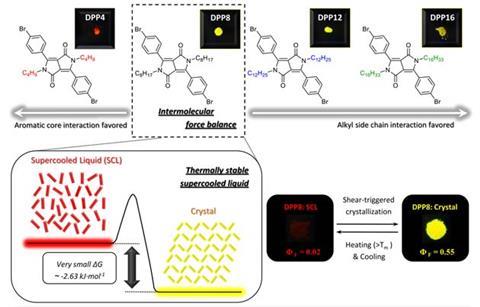 The slightest shear force causes the new material to crystallise

A ‘supercooled’ material has been discovered by scientists that crystallises at the lightest of touches – even the weight of a biological cell will trigger crystallisation. Once in its crystalline state the material glows under ultraviolet light and might find use as a new type of biosensor or an optical memory.

A material becomes supercooled when it is cooled below its normal melting temperature without solidifying – that is, crystallising. The phenomenon occurs when there is a lack of crystal nuclei to seed widespread crystallisation, and is not particularly rare. Water is easily supercooled, for instance, and exists in that state in certain clouds down to about -40°C, so long as the water is very pure and free of pollutants.

Materials scientist Jinsang Kim at the University of Michigan, US, and colleagues, however, have discovered a more unusual supercooled state. Their material can be cooled to one hundred degrees below its normal melting temperature of 134°C without solidifying – unless it is subject to even the lightest shear force, in which case it immediately crystallises. In this shear-induced crystalline state, the material fluoresces yellow under ultraviolet light.

‘The supercooled liquid-to-crystal transition by external stimulus is very sensitive,’ says Kim. ‘Even a living human cell can trigger the crystallisation so that it produces fluorescent footsteps.’

Kim and colleagues made their discovery by accident while exploring a family of organic amorphous materials – specifically those containing diketopyrrolopyrrole (DPP) as the core molecular unit, with alkyl side chains – for use in electronic devices, such as light-emitting diodes and solar cells. Having found that one particular member of the family, DPP8, formed a stable supercooled state, they began to investigate the molecular basis for the transition.

By examining the properties of other DPP molecules, the researchers came to the conclusion that the peculiarity of DPP8 came down to its mid-length side chains, which leave a very small free energy difference between the supercooled and crystalline states. Bridging this energy difference requires very large crystal nuclei, so that in the absence of other stimuli DPP8 can remain stably supercooled. Once a shear force is applied, however, the DPP8 molecules begin to clump together and widespread crystallisation begins.

Not much shear force is needed – anything from the tip of a stylus to a sound wave has been demonstrated to trigger crystallisation. Kim believes such sensitivity is promising for a host of applications, such as biosensors that differentiate between cells or optical memory that encodes information in a glowing matrix left by shear forces.

‘Many liquids can remain supercooled with almost no time or temperature restriction, and the structure-induced change in fluorescent properties is also well-established,’ says chemist Ranko Richert at Arizona State University, US. ‘What makes this material unusual is that the supercooled state can be stable, until perturbed by a shear force. Having the combination of visible optical changes and shear-induced crystallisation makes this an interesting material.’