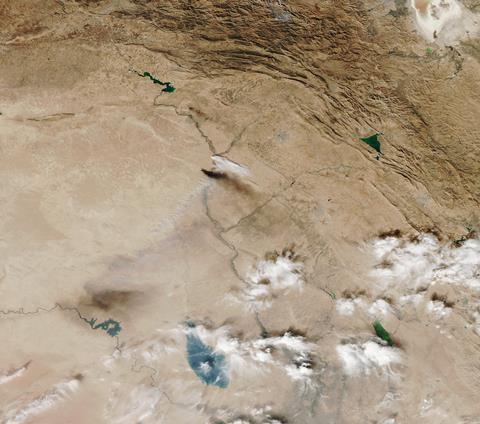 A plume of sulfur dioxide is passing over northern Iraq after a fire broke out at a sulfur mine near the city of Mosul last week. The US military has accused Islamic State (Isis) of setting the fire, amid reports that two Iraqi civilians have died from inhaling the fumes.

In recent weeks, Iraqi and US forces have closed in on Mosul, a major Isis stronghold, but have met fierce resistance from the militia group. Isis is accused of having set fire to the Al-Mishraq sulfur mine, south of Mosul, in a desperate bid to slow down the advance.

The Nasa satellites, Terra and Aqua, first identified traces of the fire on 20 October. In the following days, Aqua’s ozone monitoring instrument has tracked a billowing plume of sulfur dioxide moving over central Iraq. Sulfur dioxide is a toxic gas that can cause severe respiratory problems at high concentrations. 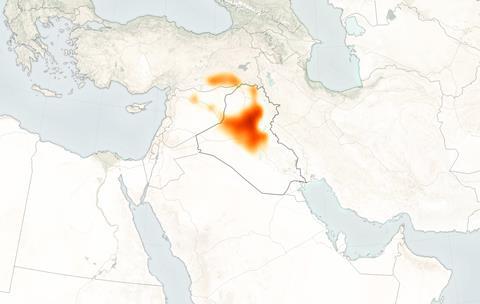 Simon Carn, an atmospheric scientist who has worked closely with Nasa on global sulfur dioxide emissions, said in a statement that the gas has now moved to higher altitudes where it can spread more quickly. At least two civilians have died and a further 1000 people have been treated for suffocation, according to the World Health Organization. Carn said on Twitter the burning mine is in the same league as the biggest volcanic eruption of 2016 when it comes to sulfur dioxide emissions, although notes that this year has been a quiet one for volcanic activity.

The incident comes 13 years after a sulfur fire at the same Al-Misraq facility in June 2003. ‘After a month of burning, the 2003 fire had released roughly 600 kilotons of sulfur dioxide — so much that it was the largest non-volcanic release of sulfur dioxide we had ever observed with satellites,’ said Nikolay Krotkov, an atmospheric scientist from Nasa’s Goddard Space Flight Center, in a statement.

There are now growing concerns that the gas release could lead to acid rain throughout the region and in neighbouring Turkey.