A simple compound containing a highly strained three-carbon ring has been found to be the toxic culprit in a highly poisonous Asian mushroom.

A team of Japanese researchers studied the mushroom Russula subnigricans and isolated cycloprop-2-ene carboxylic acid - a highly unstable molecule that has never been seen in nature before - and demonstrated that it is fatal in mice.

The toxic mushroom has reportedly been responsible for the death of seven people in western Japan since the 1950s. But the identification of the toxic molecule responsible had been delayed by confusion over which mushroom species was responsible and the fact that the poisonous molecule polymerises easily, explains lead researcher Kimiko Hashimoto from the Kyoto Pharmaceutical University. 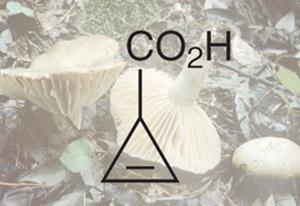 Ingestion of this mushroom causes rhabdomyolysis, the rapid breakdown of muscle fibres resulting in the release of muscle fibre contents (myoglobin) into the bloodstream. This eventually leads to kidney failure and death.

Once the correct mushroom had been identified, the team soaked it in water, and separated the compounds in the resulting extracts. Care had to be taken while concentrating this extracts, says Hashimoto: ’concentration to dryness is a usual technique during the isolation of natural products, however in this case it brings about decomposition of the toxin.’ It is thought that this played a part in earlier failed attempts to identify the toxin.

The team used mice to identify the toxic compound, and standard analytical techniques were used to determine its structure. While the molecule had not previously been known in nature, it is known synthetically and the analytical data obtained for the isolated compound exactly matched literature data. Hashimoto was surprised to find this molecule occurring naturally as it is so unstable - all previously known natural cyclopropenes are di or tri substituted and thus much more stable.

The team were also able to show that the toxin has no toxicity to single cells, suggesting that it does not directly attack myocytes. ’Our results suggest that this compound would not directly attack the muscle cells but instead trigger biochemical reactions leading to rhabdomyolysis,’ says Hashimoto.

William Wood, an expert in mushroom chemistry from Humboldt State University, Arcata, was impressed with the findings. ’It is a really difficult project to work on because the chemical they are trying to isolate is decomposing so fast,’ he says.

Hashimoto says that next he hopes to identify the biochemical reactions triggered by the toxic compound and work out the mechanism by which the toxin causes rhabdomyolysis, which may eventually lead to more effective treatment for people who have ingested the mushroom.