Living cells coupled to transistors pick up the cellular response to serotonin as an electronic signal.

As living cells can detect many compounds with high sensitivity via receptors on their membranes, researchers are keen to exploit them in electronic biosensors. Researchers in Germany now report the feasibility of just such a receptor-cell-transistor biosensor.

"We have laid the foundation for receptor-cell-transistor biosensor technology" - Peter Fromherz, Max-Planck-Institute for Biochemistry

Peter Fromherz and colleagues at the Max-Planck-Institute for Biochemistry at Martinsried used a cell line that produces large quantities of an ion channel that responds to the neurotransmitter serotonin. The researchers grew the cells on microchips covered with transistors, and selected cells that had bridged the gap between two contacts - called the source and drain - of the same transistor. 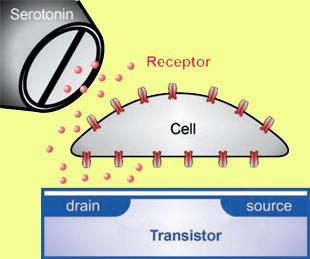 The researchers exposed these cells to high levels of serotonin, and recorded a very rapid electronic signal recorded via the transistors. ’With this coupling of a ligand-steered ion channel to a transistor at the level of an individual cell we have laid the foundation for receptor-cell-transistor biosensor technology,’ said Fromherz.

Much work remains to be done, however. One biosensor expert consulted by Chemistry World criticized the fact that the authors, although they aimed to replace the cumbersome and invasive patch-clamp technology traditionally used to read out cellular responses, still had to use a relatively cumbersome patch pipette in order to stabilize the voltage level of the cell. The authors admit that they must find a way of avoiding the use of this device. Ultimately, they hope, the RCT-sensor could be used in drug screening to identify new blockers for specific ion channels.