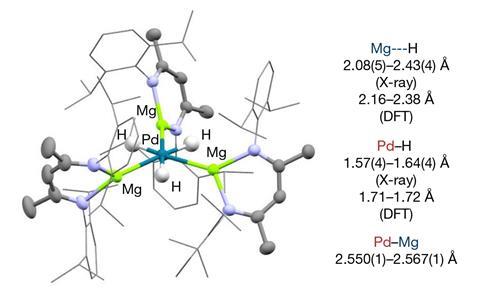 Scientists in the UK and Australia say they have isolated a new complex in which six ligands form bonds with a central transition metal in a hexagonal planar arrangement.1 The new compound would be the first example of a simple coordination complex exhibiting this geometry.

The properties and reactivity of transition metal complexes depend on their structure, so designing compounds with different shapes can open new possibilities in chemistry. The geometries of six-coordinate complexes are typically octahedral or trigonal prismatic. Hexagonal planar geometry – predicted more than 100 years ago – has never been observed in this kind of system. A team around Mark Crimmin at Imperial College London has now reported the synthesis of a transition metal complex showing this geometry.

The researchers characterised the new compound, which consists of a central palladium atom surrounded by three hydride and three magnesium-based ligands, using single-crystal x-ray and neutron diffraction combined with NMR spectroscopy. They also did DFT, molecular orbital theory and quantum theory of atoms in molecules (QTAIM) calculations to understand the bonding in the material. ‘The complex has been well modelled as an alternating sigma donor–sigma acceptor array,’ says Alison Edwards of the Australian Nuclear Science and Technology Organisation in Sydney who carried out some of the neutron diffraction experiments. ‘The magnesiums make a triangle around the central palladium atom and the hydrogens make another triangle. They’re staggered in such a way that all the bond angles at the middle are very similar and close to 60 degrees. That’s consistent with hexagonal planar geometry,’ she says. The proposed structure contains rare palladium–magnesium bonds and organic ligands attached to the magnesium centres.

John Hartwig at the University of California, Berkeley, US, who was not involved in the study, describes the new geometry as unusual. ‘It definitely caught my eye,’ he says. ‘It’s the kind of material one would present in an undergraduate course.’ Ian Riddlestone of the University of Surrey, UK, explains that the key step in preparing the complex is the use of a main group metal as a ligand. He thinks it will be exciting to see how this odd structure influences the properties of the compound. ‘By uncovering a new parent geometry for a transition metal complex and rationalising its formation, the researchers have opened up the possibility for the discovery of exciting new reactivity at transition metal centres,’ he says.

But not everyone is convinced. Gregory Girolami at the University of Illinois, US, believes that the magnesium centres are simply electrostatically attracted to the partial negative charges on the three palladium-bound hydrogen atoms. ‘I don’t believe it’s accurate to describe the structure of this compound as hexagonal planar,’ he says. ‘Neutron diffraction studies of the iron hydride [FeH6]4- carried out by Bau and co-workers 35 years ago2 showed the presence of short contacts with surrounding magnesium cations, but the interactions of the anion with the magnesium are almost entirely ionic. This view of the bonding has been confirmed by DFT calculations carried out on a number of similar systems.’

Crimmin realises that the new molecule challenges current understanding and says debate is important. ‘The bonding is dominated by ionic components,’ he says. ‘Electrostatic interactions between the magnesium and hydrogen atoms do play a role in stabilising the complex. Nevertheless, our calculations show that these interactions are less important than donor–acceptor bonds involving the d-orbitals of palladium and s-orbitals of the magnesium atoms. This, combined with the fact that the palladium–magnesium distances are well within the sum of covalent radii while the magnesium–hydrogen distances are not, led us to conclude that the most appropriate description of the geometry is hexagonal planar.’