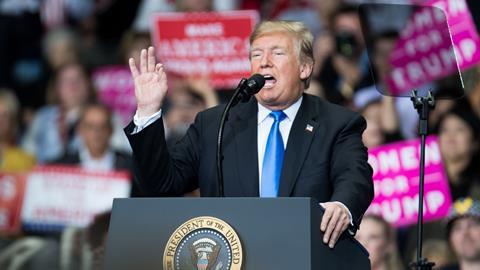 President Trump has signed an executive order to promote ‘free speech’ on university campuses and has threatened to cut research funding from those deemed to have suppressed it. Unsurprisingly, this has drawn a sharp response from organisations representing universities, who are worried by how this will be applied.

‘Under the policy I am announcing today, federal agencies will use their authority under various grant-making programmes to ensure that public universities protect, cherish the first amendment and the first amendment rights of their students, or risk losing billions and billions of federal taxpayer dollars,’ Trump said in a signing ceremony packed with conservative student activists on 21 March. He appeared to be referring to a number of cases over the past few years where controversial conservative speakers had their invitation to speak at a university rescinded or when protests erupted when such figures did speak on campuses.

‘Every year, the federal government provides educational institutions with more than $35 billion (£26 billion) in federal research funding – all of that money is now at stake,’ the president warned. ‘If a college or university doesn’t allow you to speak, we will not give them money – it is very simple,’ he told the audience

University research groups like the Association of Public and Land-grant Universities (APLU) were unimpressed. The group’s president, Peter McPherson, said the executive order represents ‘a very concerning federal overreach’. He added that the directive could leave funding of vital research subject to the whims of political appointees.

The American Chemical Society (ACS) says it supports the first amendment rights in all settings including at colleges and universities, but it is cautiously watching to see how the new presidential edict is executed. ‘While it is too soon to know what the impacts of the executive order will be, the ACS will be monitoring its implementation to determine the effect on the country’s institutions of higher learning,’ the organisation tells Chemistry World.