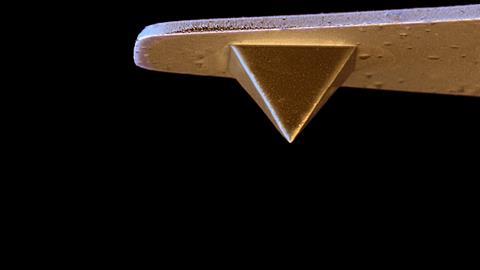 ‘Seeing atoms is easy nowadays,’ remarks Christoph Gerber, co-inventor of the atomic force microscope (AFM) – a tool that has allowed scientists to gaze at atomic structures for decades. But these microscopes are fast becoming so much more than a window into that world, with researchers now using the AFM to break molecular bonds, probe unknown chemical frontiers and even explore the human genome.

It wasn’t always so easy to see atoms, however. Back in 1979, Gerd Binnig and Heinrich Rohrer, both based at the IBM Zurich laboratory in Switzerland, were attempting to view surfaces with atomic scale precision. The pair started toying with a strange quantum effect known as tunnelling, where electrons can pass through seemingly impenetrable barriers. If they could capture this current flow between a scanning metal tip and a surface, the team realised the current would give away the atoms’ positions and they could unveil a hitherto unseen world.

By 1986, Binnig and Rohrer were awarded the Nobel prize in physics for their subsequent invention – the scanning tunnelling microscope (STM). The instrument revolutionised modern physics, allowing researchers to map the surfaces of gold and silicon with unprecedented precision. Another IBM researcher, Don Eigler, would even go on to write out his company’s logo in individual xenon atoms with an STM in 1991. 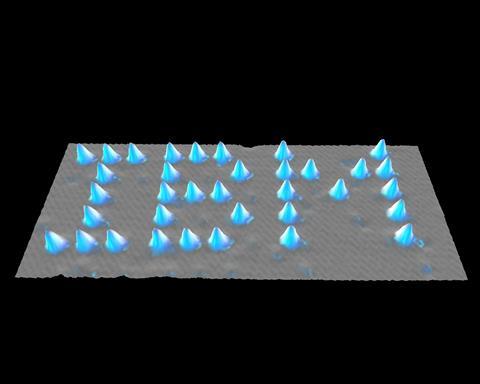 The iconic image that brought AFM to the attention of many. IBM spelt out its logo in xenon atoms

‘It was a wild time,’ says Franz Giessibl, a physicist from the University of Regensburg, Germany, and one of Binnig’s PhD students at the time. ‘There were lots of hopes with what one could do with it and some of the hopes were outrageously far-fetched – others were more realistic.’

But there was one sticking point – the STM could not image non-conductive surfaces, or any surface in anything other than a vacuum. To resolve this, Binnig, along with Gerber and Calvin Quate from Stanford University, US, simply invented another microscope in the same year he won the Nobel. But this one would measure the force exerted between the tip and surface and not current.

The team moved a diamond tip, glued to a gold foil cantilever, across a sample and measured the cantilever’s deflection via piezoelectric translators – like a needle following the grooves in a vinyl record. This new instrument, the AFM, could detect forces as small as 10-18N. Within a year, the IBM team could image a graphite surface down to 2.5 angstroms.

Over the past 30 years, the AFM has been used to probe everything from atomically resolved ceramic surfaces to individual molecules and cells. None of this would have been possible without those early images capturing the community’s imagination, according to Gerber: ‘It has developed thanks to all these people who started to work with it - those people who really were curious in order to develop it even further.’ 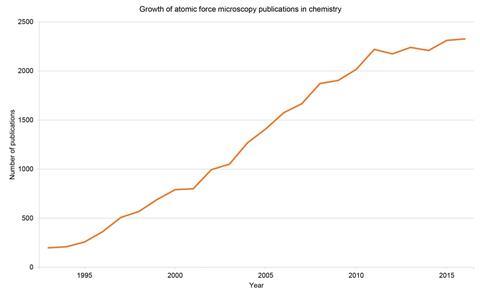 Many researchers have tinkered with the AFM over the years, finding new opportunities to probe matter at atomic resolutions using its ‘non-contact’ (nc) mode. In this setting, the tip oscillates at high speed and researchers can measure how its resonant frequency dampens as it moves across the surface to obtain atomic resolution images.

Giessibl fine-tuned this set up in 1998. The new cantilever was made from a quartz crystal tuning fork and is now just as ubiquitous as the electronic watch it was sourced from. Ten years on, another group at IBM’s Zurich laboratory functionalised this sensor with a carbon monoxide tip and used it to image individual bonds within a pentacene molecule. This functionalisation has allowed for a sharper AFM tip and far greater sub-atomic resolutions.

Others have exploited this freedom to measure weak molecular interactions between seemingly inert molecules. Ernst Meyer and his colleagues from the University of Basel have bonded a single xenon atom, rather than a carbon monoxide molecule, to an AFM tip.

By attaching a xenon, argon or krypton atom to a metal–organic framework and bringing the tip within close proximity, the team can measure the attractive force between the two noble atoms. As expected, the AFM can detect the small van der Waals interactions that arise. But the research suggests that the attraction cannot be explained by van der Waals forces alone.

AFM’s role in chemistry has so far centred on this principle of bond imaging. Back in 2012, Leo Gross and his colleagues at the IBM Zurich lab successfully matched the order of carbon–carbon bonds in C60–buckminsterfullerene to the force exerted on the AFM cantilever. The connection allowed the team to correlate bond orders with an individual bond’s brightness in the image.

‘[Scanning probe techniques offer] a new perspective to answer some long standing questions in organic chemistry,’ comments Diego Peña from the University of Santiago de Compostela, Spain, and one of Gross’s close colleagues.

The AFM hasn’t just furnished chemists with a new point of view, however; it’s enabled them to build a chemical laboratory on the nanoscale. Takashi Kumagai at the Fritz Haber Institute of the Max Planck society in Germany and his colleagues have used an nc-AFM to switch a porphycene molecule into its mirror image form. A porphycene molecule is a modified porphyrin with four central nitrogen atoms and two hydrogen atoms. The AFM’s oscillations supplied enough energy to flip the position of these hydrogen atoms, transforming the porphycene into one of its isomers.

Earlier this year, Gross and Peña’s team was also able to induce a reaction in a single molecule. But rather than rely on an AFM to both stimulate and image a reaction taking place, the group used both an STM and an AFM. Using voltage pulses from the STM tip, the group transformed a dibromoanthracene molecule into a 10-membered diyne ring. All of this was witnessed on an AFM.

Chemists have even used a combination of STM and AFM to produce a molecule that has eluded conventional synthesis techniques. Triangulene is a highly unstable biradical aromatic whose existence was theorised over 60 years ago but had been impossible to synthesise. Niko Pavliček’s team from IBM Research in Zurich, Switzerland, and the University of Warwick, UK, were able to create triangulene by removing two hydrogen atoms from a precursor to the molecule.

In the future, the AFM will give chemists new opportunities to study organic intermediates and unstable molecules, according to Peña. ‘Up to now most groups are reproducing on-surface key reactions that are well known in solution chemistry,’ he adds. ‘However, in the future I will expect also the other way around: first a new reaction will be discovered by nc-AFM which will be then utilised in solution chemistry.’ 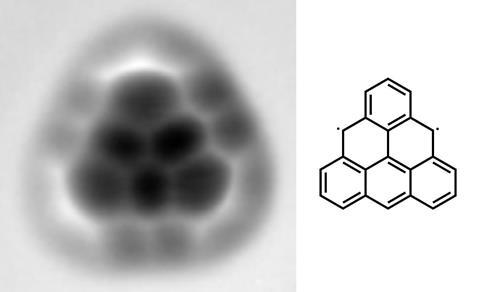 AFM and STM have even enabled chemists to make molecules that have eluded conventional synthesis techniques, such as triangulene seen here

The humble cantilever’s current use extends far beyond organic chemistry though. Medical researchers are now harnessing its power to detect the early onset of cancer, and Gerber is once again leading the charge. ‘You can now observe biology in real time,’ affirms Gerber, who won this year’s Kavli prize along with Binnig and Quate for their contributions to nanoscience.

Now based at the University of Basel in Switzerland, Gerber’s group has recently made an array of AFM cantilevers that can pick up a single point mutation in RNA taken from melanoma biopsies. Scrapping the diamond tips he painstakingly made 30 years ago, Gerber has now functionalised his gold cantilevers with oligonucleotides. These small RNA sequences will hybridize with incoming biopsy RNA and induce a measureable force on the cantilever.

The AFM biosensor is so sensitive that the group is now using it to characterise the efficacy of the popular gene editing tool, Crispr–Cas9. It’s a remarkable reinvention of a technique that was originally made 30 years ago with a crushed record player stylus and a small piece of gold foil.

‘I would have never thought when we started this that we’d ever get that far,’ remarks Gerber. Such great leaps in development make it hard to predict AFM’s future, but Gerber is adamant it will remain a mainstay in research.

One thing is certain – whether the AFM is used in the clinic or the lab, it’s here to stay. ‘We have no senses that allow us direct access to the world of atoms, they’re just too small,’ says Giessibl. ‘STM and AFM, they are our extended fingers, our extended eyes to live in that world, to really engage in this world of atoms - I think they’ll stick around.’