Researchers in Japan have developed a fuel cell that can convert methane, the main component of natural gas, into methanol, a useful fuel, at moderate temperatures.

Though used as a fuel in motor racing for decades, methanol’s wider use has been thwarted by the expense of producing it from methane - even though cheap methane is available from natural gas and as a waste product from landfill sites and cattle farming. Methanol differs from methane only by the presence of an extra oxygen atom, but getting this atom in without ending up with carbon dioxide is difficult and normally requires high temperatures and pressures. 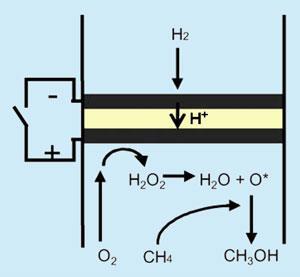 The group of Takashi Hibino at Nagoya University, Japan, has now developed a new method of converting methane to methanol, which can operate at moderate temperatures (80?C) and atmospheric pressure. The researchers used a new material, a tin phosphate doped with small amounts of indium, as the conducting material (electrolyte) in a hydrogen/air fuel cell.

The fuel cell normally converts hydrogen and oxygen to electricity and water but reactive oxygen radicals are also formed in the process.

The group found that by adding methane to the hydrogen fuel, they could use the activated oxygen radicals to oxidise methane to methanol at temperatures much lower than those of conventional process. While the device uses up hydrogen as well as methane, the energy from the hydrogen reaction can be harvested as electricity, as in a normal fuel cell.

’Our fuel cell could simultaneously generate both electricity and methanol,’ Hibino told Chemistry World. ’However, the reaction activity for methane was still low, so that unreacted methane must be circulated many times in actual applications.’

Nevertheless, Hibino is optimistic about the potential for scaling up the process. ’Our target is that this fuel cell is used as a reactor for methanol production in place of conventional chemical plants.’

Yongchun Tang, director of the Power Environmental Energy Research Center at the California Institute of Technology, Pasadena, US, has led previous efforts to convert methane to methanol. ’I believe this work is of significant interest toward energy efficiency of natural gas utilization,’ he told Chemistry World. ’Low cost methanol is a very flexible feedstock that can be used for the production of gasoline and diesel or be utilized directly as a fuel. In addition, the benefit of this technology is to provide an alternative method for handling remote gas or small quantities of associated gas. The proposed technology could stop the flaring of natural gas and reduce emissions from oil production.’