Turning heat into electricity with polymers

Swedish researchers have improved the thermoelectric efficiency of an organic conducting polymer by controlling the material’s oxidation level, boosting the prospect of developing cheap, flexible and lightweight organic thermoelectric devices to convert waste and natural heat into electricity.

For decades, thermoelectricity - the generation of electricity directly from heat - has largely been confined to systems that require complex manufacturing processes and comprise expensive metal alloys, such as bismuth telluride (Bi2Te3). However, recent developments suggest that organic semiconductors could offer cost-effective alternatives that can be made directly from solution, which could open up new possibilities, including harvesting energy over large areas. 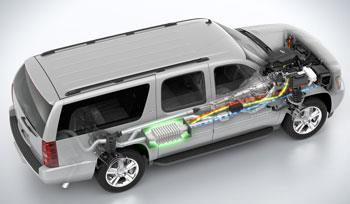 But one significant obstacle has been creating a thermoelectric polymer that performs just as well as conventional inorganic materials. Now, Xavier Crispin and colleagues at Link?ping University in Sweden, have had some success optimising the efficiency of the organic conducting polymer poly(3,4-ethylenedioxythiophene), complexed with tosylate (PEDOT-Tos), and using it to make a rudimentary thermoelectric generator (TEG).

Although the material’s efficiency is still four times lower than commercial Bi2Te3 at room temperature, the team says the values they obtained approach those required for efficient devices.

In order to optimise the polymer’s thermoelectric properties, the team controlled its oxidation level by exposing it to a vapour of tetrakis(dimethylamino)ethylene (TDAE) molecules. This alters the electronic structure by transforming the positively charged polymer chains into neutral ones.

’It presents a very large step in terms of performance indicators of organic thermoelectric materials,’ says Martijn Kemerink, who investigates organic electronics at the Eindhoven University of Technology, Netherlands. ’They not only optimised the material but also integrated it into a working thermoelectric generator. Not that the authors have built a device that can realistically be used - they don’t claim they did - but they do show a possible route,’ he adds.

Crispin points out that being able to process a thermoelectric material directly from solution opens up the possibility of a new low-cost manufacturing technique, such as printing, to create large area thermoelectric generators. ’The polymer’s flexibility also opens new possible applications, such as the integration of TEGs in textiles or in close contact with the body to power nomadic electronics, and the possibility to adapt the shape of a heat exchanger and really functionalise it,’ he adds.